by Natalie Digate Muth
on June 02, 2010
Filter By Category 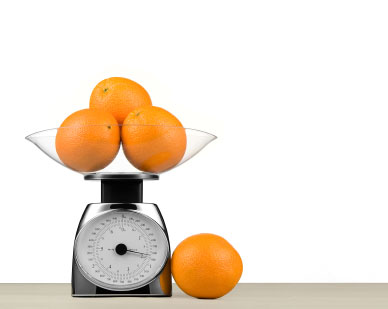 Forever in search of the perfect calorie-burning, fat-melting, do-it-in-two-weeks diet – “health gurus” seem to have come up with a million different concoctions of how to get thin quickly and easily.  A popular notion is that consuming a diet high in supposedly “catabolic foods” – or foods that require more energy to chew, digest, and absorb than they actually contain (“negative calories”) makes for a good way to lose weight.  You’ve probably heard of it- eat all the celery, grapefruit, and apples you want and you’ll watch the pounds melt away.  While it is true that metabolism is increased after eating – known as the thermic effect of food- this caloric expenditure is relatively small, and no study has ever demonstrated, regardless of the dietary make up of the food, that more calories are used to metabolize a food than the number of calories the food contains.  Biologically the notion just doesn’t add up.  Why would we evolve to eat food that provides us with negative energy?  As you can tell by the obesity epidemic, a consequence of overabundance of food and low levels of physical activity, the human body is well-suited to hold on to fat.  Evolutionarily, we aren’t made to eat food that inherently makes us lose weight.  Still, a quick Google search will lead you to websites with lists of “catabolic foods” and on some you can even find people claiming specific very high calorie amounts required to metabolize these foods.  The truth is that there is no scientific research in support of a catabolic diet or any “negative calorie” foods.

That’s not to say you can’t lose weight on these “diets.”  While you won’t burn more calories eating a food than the number of calories the food contains, you can and should include low-calorie foods in a healthy eating plan to help keep your weight loss efforts on track.  Following is a list of 10 low-calorie but nutrient-dense foods that will help you fill up and, as part of a balanced eating and exercise plan, take off the extra weight.

Blueberries - This low-calories (50 berries contains only 40 calories) nutrient powerhouse contains high levels of antioxidants and may even help to stave off cognitive decline.

Artichokes – A medium artichoke contains only 60 calories and a whopping 6 grams of fiber which is sure to keep you feeling full.  The artichoke is also an excellent source of many vitamins and minerals, including folic acid which is especially important for pregnant women.

Grapefruit - Low in calories (only 40 calories in a medium grapefruit), high in taste and nutrients, and possibly containing a unique compound that aids in weight loss, grapefruit is a great addition to any breakfast.

Spinach - The epitome of health food, you can get a good dousing of many of the vitamins and minerals you need with a large spinach salad (if you load up with 2 cups of spinach you’ll only be taking in 14 calories).

Lentils - Lentils are low in calories (a ½ cup contains slightly more than 100 calories) and high in protein, iron, and fiber.  This makes for a super-healthy snack or addition to any salad, soup, or meal.

Orange -This citrus fruit is tasty, widely available, relatively inexpensive, easy to transport, and a low-calorie (about 60 calories in a medium-sized orange) but filling snack that also happens to be loaded with vitamins and minerals.

Watermelon – A cup of cut-up watermelon weighs in at less than 50 calories and this refreshing summer fruit is also loaded in vitamins which may help to prevent many diseases and may also have a Viagra-like effect.  You may also want to keep the fruit nearby for your summer outings, as watermelon also has been shown to help stave off heat stroke.

Egg whites – Egg whites are a great way to get a ton of protein (4 grams per white) with nil calories (about 20 calories).  Throw in the yolk and you’re up to 80 calories and 6 grams of protein, but also a healthy dousing of many vitamins and minerals along with heart-healthy omega 3 fatty acids.

Canned tuna - Eating a can of water-packed tuna is a low-cal way (about 130 calories per can) to get loads of lean protein, omega 3 fatty acids, B vitamins, selenium, and vitamin D.  Tuna is a great way to get in the recommended minimum of two servings per week of fish.

Bok choy - Very low cal (a half-cup serving has only 10 calories) and nutrient-dense (rich in vitamin A, vitamin C, and calcium), this Chinese cabbage is a must have for any Asian-style meal.