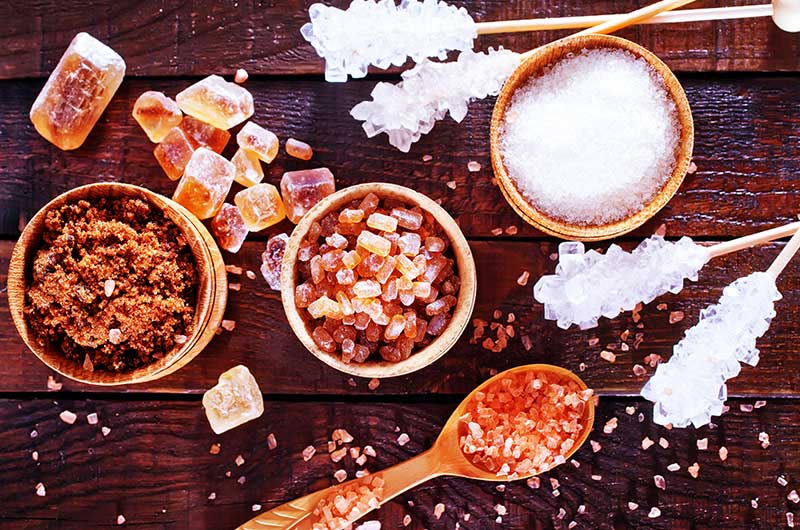 Sugar has become the Big Bad Wolf of the nutrition and health world. Associated with increased systemic inflammation, high insulin levels, diabetes, obesity, tooth decay and cavities, and cancer, it’s no wonder store shelves are teeming with all sorts of sugar substitutes, each purported to allow you to have your cake and eat it, too.

White sugar is a refined, processed food that contains 15 calories per teaspoon and is devoid of any vitamins or minerals. When sugar enters the blood stream, your pancreas produces and releases insulin to attach to the sugar (glucose) molecules and shuttle them into the cells where they will be used for energy. However, if you have insulin resistance, pre-diabetes or diabetes, insulin has a difficult time unlocking cells so that the glucose can enter. Instead, the excess glucose gets packaged into triglycerides (fat) and stored in fat cells for later use. Many of the sugar substitutes that were developed contain no form of sugar and thus do not produce an insulin response. Unfortunately, most of these types of sweeteners are chemicals rather than natural foods.

Sugar substitutes can be divided into four categories: natural sweeteners, artificial sweeteners, sugar alcohols and novel sweeteners. Each type of sugar has its pros and cons, and specific uses when replacing sugar.

Natural sweeteners are often touted as better options for sugar because they come from real food and may contain trace amounts of vitamins and minerals. Honey, agave nectar, date sugar, coconut sugar, molasses, maple syrup, and fruit juices and nectars are considered to be natural sweeteners. As these foods do contain a combination of glucose and fructose, they all contain calories (15-20 calories per teaspoon), will increase blood sugar level, and can lead to tooth decay and cavities. These sugars can be used to in baking as well as to sweeten beverages (tea, coffee) and as a topping for some foods. Honey, especially when in its raw form, contains antimicrobial properties and can be used as a remedy to tame a cough. Do not give honey to a child less than 12 months old, as there is a slight risk for botulism. 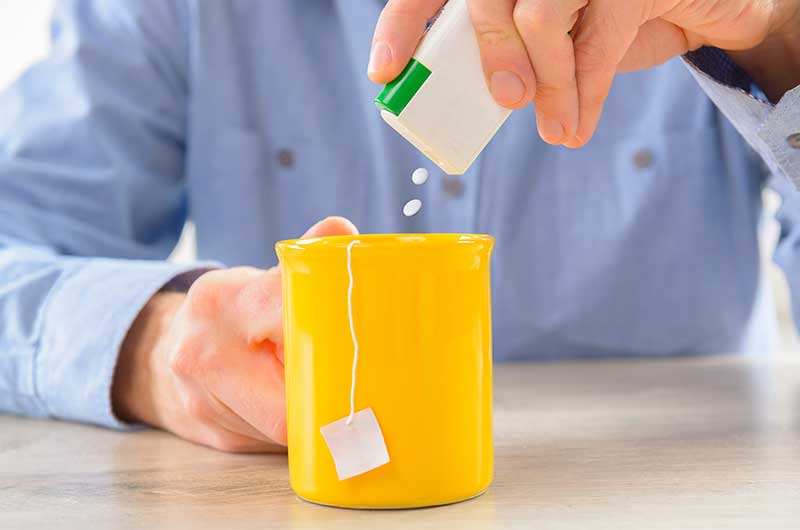 Artificial sweeteners are also known as synthetic sugar substitutes. While some are derived from natural substances, such as herbs or sugar, most are chemical substances made in a lab. These types of sugars are much sweeter than table sugar and, as a result, require smaller amounts to add a sweet flavor. The most common artificial sweeteners include sucralose (Splenda®), aspartame (Equal®, NutraSweet®), acesulfame potassium (Sunette®) and saccharin (Sweet’n Low®). They are most often used in beverages (soft drinks, powdered drink mixes, juices), baked goods, candy, jams and jellies, yogurt and many canned goods. As most artificial sweeteners contain few or no calories, they are thought to be beneficial for weight loss and preventing dental caries, and for people with diabetes because they won’t raise blood sugar levels. However, numerous side effects have been reported with use of artificially sweetened products and there are questions as to whether use of these sweeteners may increase one’s risk of cancer. Although the FDA has given these products approval for use in numerous food products, they are not natural and thus would not be considered appropriate for those who follow a clean eating style of eating.

While most sugar alcohols are polyols, a type of carbohydrate found in fruits and vegetables, some may be synthetic. These types of sweeteners are less sweet than sugar and do contain calories (from carbohydrates), but fewer calories than sugar. Despite their name, they do not contain any alcohol. Some of the carbohydrates in sugar alcohols are not absorbed, so there is less of a blood sugar rise when these types of sweeteners are consumed. Xylitol and erythritol are the two most widely used artificial sweeteners in baked goods and can be found in the baking section of health food supermarkets. Sugar alcohols, such as sorbitol, are commonly found in chewing gum and sugarless candies. Side effects of consuming too much sugar alcohols include gas, bloating and diarrhea.

Novel sweeteners, such as stevia, are difficult to put into one category. Stevia is unlike other natural sweeteners in that it comes from the leaves of the stevia plant. Widely found in natural food markets, and usually sold as a liquid, stevia is 200 times sweeter than sugar. The FDA has not approved stevia leaves or their extracts for use as food additives. There is some concern that this form of stevia has on blood sugar control, cardiovascular and renal systems, and fertility. What the FDA has approved for use is an isolated chemical from stevia, called Rebaudioside A (Reb A). This form of stevia can be found in TrueVia® and PureVia®; it contains no calories and can be used to sweeten beverages and in baking.

Sugar is widely known to increase inflammation, encourage weight gain, cause problems with blood sugar control, and promote tooth decay and cavities. Sugar substitutes seem to be a logical alternative to sugar in hopes of saving calories and reducing effects on blood sugar. Choosing a natural sweetener may provide some vitamins and minerals and are a clean choice as they come from real foods instead of produced in a lab. However, caution must be urged when consuming any sweetened products, as they can displace healthier foods and contribute to unnecessary weight gain.

8 Exercises Every Man Should Do