How Yoga Can Help You Recover from Food Addictions

by Elizabeth Kovar
on June 01, 2015
Filter By Category 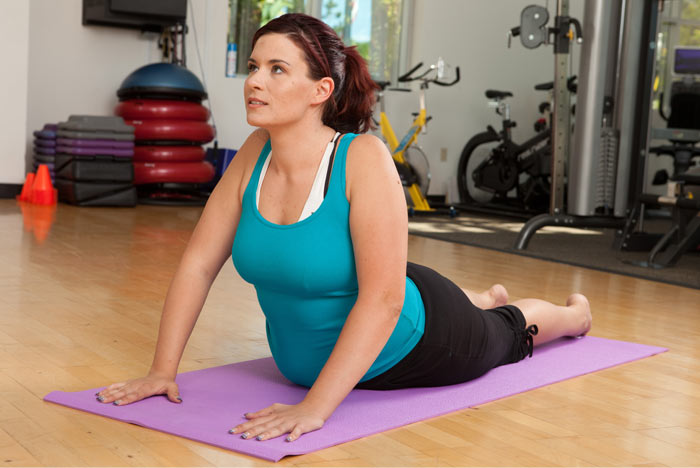 Food addiction is labeled as a disease where a person loses the control, or the ability to stop, consuming food. Food addictions occur for many reasons. Scientifically, food addictions are a chemical dependency on certain foods, such as high-fat, high-sugar or salty foods, or food in general.

Research shows that addictive chemicals and illegal substances trigger the brain’s reward and pleasure centers. When consuming large amounts of highly palatable foods, the same reward center of the brain triggers, releasing feel-good chemicals such as dopamine. People feel the need to eat again once they associate pleasure with increased dopamine transmission into the brain’s reward center. These reward signals often override satiation signals. Like any addiction, the brain yearns for more stimulation. Thus, it’s a vicious cycle of battling cravings, lack of fullness and the dependency to “feel good.”

Generally, when a person eats beyond the body’s physiological demand for food, and connects emotion to food, he or she may have, or develop, a food addiction. According to the National Association of Anorexia Nervosa and Associated Disorders, up to 24 million Americans suffer from an eating disorder (binge eating, bulimia, anorexia). Below are the signs or symptoms of an eating disorder.

-Eating to the point of feeling ill

-Avoiding social events due to a fear of overeating

-Refusing to eat healthy foods because of the lack of taste

In modern terms, yoga is categorized as a “mind-body” exercise. Ancient yogis defined yoga as a “union” between mind, body and spirit. When performing a pose, each asana features a focus point (drishti) and physical and physiological benefits. Because poses are held, the mind has no choice but to focus on the body.

Traditional yoga was used as a means to “prep” the body for meditation. It is a lifestyle that adheres to living, eating and breathing a certain way. Authentic yoga classes include a physical practice, breathing exercises and meditation. Most people connect yoga to its physical benefits, but with a long-term practice individuals develop a deeper awareness of and appreciation for the subject. Although all forms of movement can be considered “mind-body,” yoga connects the brain and body through two key hormones of behavior.

Research indicates a strong connection between yoga and physiological awareness. Usually, when the body feels better a person eats healthier. This sense of awareness and brain-body connection has been detected through fundamental neuroendocrine interactions.

The endocrine system mediates the relationship between the mind and the body. Emotions such as happiness, fear, rage, love or anger result from the hormonal activity of the endocrine glands. The endocrine system and hormones are a complex subject, but they essentially act as a messenger to communicate messages to the body.

In yoga, the pituitary gland is known as the “Master Gland” and is under control of the hypothalamus. During meditative and breathwork activities, two key hormones of behavior—corticotropin releasing hormone (CRH) and adrenocorticotropin hormone (ACTH)—bond the brain (hypothalamus and higher brain centers) and body (pituitary-adrenal glands). Together this interaction plays a role with visceral and cognitive responses (American Council on Exercise, 2012).

CRH is released by the hypothalamus and is involved with the stress response. It sits in the same area of the brain that controls hunger, thirst and body temperature. The main function is to stimulate pituitary synthesis of ACTH, which is released by the pituitary gland and affects bodily functions. This controls the secretion of hormones from the adrenal gland that influence metabolism of carbohydrates, sodium and potassium. Also, ACTH controls the rate at which substances are exchanged between blood and tissue. The adrenal glands produce cortisol, which is released in response to stress-increasing blood pressure and glucose levels. When cortisol levels rise, ACTH falls, and vice versa. During mind-body exercises, the hypothalamus-pituitary-CRH interface is the “mind-body connection” (American Council on Exercise, 2012).

When the mind and body are connected, activation of the hypothalamic-pituitary-adrenal axis (HPA) is reduced (American Council on Exercise, 2012). The adrenals decrease the production of cortisol and catecholamines, which are hormones produced by the adrenal glands and released during times of physical and emotional stress. The primary catecholamines are epinephrine, norepinephrine and dopamine (some of which are part of the “fight or flight” response). When the hormones decrease, so do arousal and hypervigilance (American Council on Exercise, 2012).

Yogis experience pleasure (or transcendental experiences) that are the same uplifting feelings derived from eating certain foods. As a result, yoga “rewires” the brain and reduces stress-related habits. When awareness is present, individuals are cognizant of their actions and relationship with food. The more “good” hormones that are secreted, the more positive the transition into healthier behaviors. Yoga connects the sensations of feeling good away from food and binge eating.

Yoga is a profound exercise that organically changes people, perceptions and behaviors. Balanced hormones integrated with relaxed states of being assist the emotional body to process life circumstances. In simple terms, the “rewiring” is an organic process that enlightens beings and enhances self-confidence. Overcoming food addictions with yoga is a journey and not an instant recovery method. The more the body stimulates positivity outside of food, the more inclined an individual will be to leave negative food habits behind.

How to Coach the Vegetarian and Vegan Client

by Elizabeth Kovar
on May 27, 2015
Load Previous Article
Brand Anthem