I’m looking to gain weight and add muscle to my frame- should I be consuming extra protein?

by Jessica Matthews
on September 08, 2009
Filter By Category 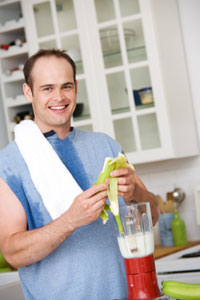 Who says it is possible to have too much protein?

Your body, that’s who. Quite simply, the human body is unable to store extra protein. Protein consumed in excess of the body's needs is not used to build muscle; rather, it is used for non-protein bodily functions.

What can happen if too much protein is consumed?

It is important to keep in mind that the potential for harm exists if protein is consumed in excess. Such harm is most likely to occur in the individual who consumes protein or amino acid supplements.

For example, excess protein may lead to dehydration, because protein metabolism requires extra water for utilization and excretion (i.e., elimination) of its by-products. Since exercising individuals are already at an increased risk for dehydration, the additional strain of protein waste excretion may further promote dehydration.

Excess protein has also been shown to lead to an increase in the loss of urinary calcium. A chronic calcium loss, due to excess protein intake, is of particular concern because it may increase the risk of osteoporosis, especially in women.

What about athletes? Don’t they require more protein?

At least two issues need to be addressed when discussing the protein needs of an athlete: protein as a source of fuel and protein for building muscle mass.

Research conducted in the early 1800s surmised that because muscles include considerable protein that it must be their preferred fuel. Furthermore, it was inferred that increases in muscle mass must come from extra dietary protein. It is now known that carbohydrates, in the form of muscle glycogen, are the primary fuel for muscles. Research also confirms that sound resistance training builds and strengthens muscles, not extra dietary protein.

Does that mean protein is not that important after all?

Even though most exercise scientists agree with current research, they believe that protein does play an important secondary role during exercise that may increase an athlete's need for protein above the recommended daily allowance (RDA). The American Dietetic Association (ADA) recommends increased protein intake only for individuals involved in intense aerobic training (greater than 70 percent VO² max). Even though the ADA developed such a recommendation, it recognizes that average Americans, including most athletes, consume protein above this recommendation.

The ADA does not support the notion that the protein needs of a competitive weight lifter are greater than the average individual. The official ADA position is that a well-balanced diet will provide the dietary protein a weight lifter needs.  Accordingly, an individual who would like to add muscle should focus on combining a sound resistance-training program with a well-balanced, calorically dense diet.

Most exercise scientists and dietitians agree that exercise does not significantly increase the body's need for protein. A few, however, believe that physically active individuals have an increased need for protein. Peter Lemon, Ph.D., professor of applied physiology at Kent State University, Kent, Ohio, is a renowned advocate of the theory of increased protein needs for athletes. He recommends that athletes consume between one to one-and-a-half times more protein than the established RDA.

However, since average Americans, including most athletes, already consume one-and-a-half to two times the RDA, it would appear that athletes do not need to increase their protein intake.