I’ve heard that performing aerobic workouts at a low intensity is best for losing body fat - is that true?

by Jessica Matthews
on September 03, 2009
Filter By Category 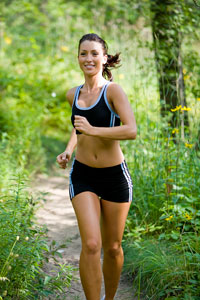 You may have heard of or even have tried aerobic exercise programs and/or videos that feature low-intensity workouts which purport to maximize fat burning. The argument behind such an alleged theory is that low-intensity aerobic training will allow your body to use more fat as an energy source, thereby accelerating the loss of body fat.

So is low-intensity exercise my best option for losing body fat?

Confused? Allow me to give an example. Let’s say you perform 30 minutes of low-intensity aerobic exercise (i.e., at a level of 50 percent of maximal exercise capacity). As a result you'll burn approximately 200 calories - about 120 calories of which will come from stored fat (i.e., 60 percent).

However, if you exercise for the same amount of time at a high-intensity (i.e., 75 percent of your maximal exercise capacity) you’ll burn approximately 400 calories- about 140 calories of which will come from stored fat (i.e., 35 percent).

If it doesn’t burn as many calories, then why even bother with low-intensity exercise?

Although the more vigorous exercise does burn more total calories as well as more fat calories (as seen in the example above), the less intense form of exercise does have its benefits. Some people tend to find that lower-intensity exercise is more comfortable and enjoyable, and therefore, they may be more willing to engage in such workouts more consistently than they would higher-intensity exercise. The point to remember is that low-intensity workouts do, in fact, promote weight and fat loss. You just have to do them for a longer period of time.

So is there or is there not a fat-burning zone?

The idea of a “fat-burning zone” is simply a myth. Performing aerobic exercise at a low-intensity is not a better or more effective way to lose weight than more intense physical activity. Keep in mind that you lose weight and body fat when you expend more calories than you consume, not because you burn fat (or anything else) when you exercise.

What can you tell me about the FDA approved over-the-counter diet pill "Alli"?