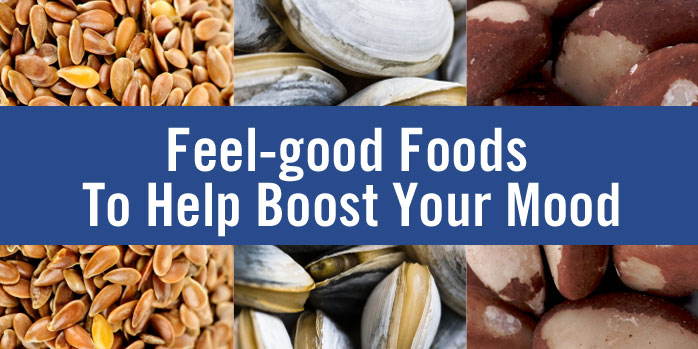 Think it’s impossible to change your mood based on the foods you eat? Think again. Scientific literature continues to uncover new information on the connection between what we eat and the way we feel. At the center of this correlation lie a couple key mechanisms involving blood sugar and a brain chemical known as serotonin.

Popular television commercials allude to the fact that “you aren’t you when you’re hungry.” This is a concept with which many of us are intimately familiar and have undoubtedly experienced from time to time. As blood-sugar levels begin to drop three to four hours following a meal, people can become irritable and easily agitated. That’s why do many experts recommend eating small, frequent meals throughout the day to minimize blood-sugar fluctuations.

Serotonin, on the other hand, is the so-called “feel good” chemical in the brain. Numerous studies have correlated low levels of serotonin with symptoms of depression and anxiety (Baldwin, 1995). Serotonin is also thought to control the release of insulin in the body, which is directly linked to blood-sugar regulation (Paulmann, 2009). The amount of available serotonin is also highly influenced by the foods we eat, forming the basis for some key good-mood foods containing nutrients such as omega-3s, vitamin B-12 and selenium (Bodnar, 2005).

Aside from fish, one of the most common sources of omega-3 fatty acid are flaxseeds. This versatile food is a tasty source of protein and dietary fiber and is even utilized in the textile industry for material. Its omega-3 properties are often associated with health benefits such as lowering LDL (“bad”) cholesterol, enhancing diabetic control and, of course, mood improvement.

Ways to Enjoy
Add a handful of flaxseed to trail mix, blend into a smoothie or toss with your favorite veggies. Ground flaxseed also is available for cooking and baking purposes. If you’re trying flaxseed for the first time, consider sprinkling a bit onto your morning oatmeal for a savory treat.

Vitamin B-12 is needed for red blood cell formation and healthy nerve functioning, and is critical to a number of chemical reactions. While it can be found in a variety of fortified and animal-based foods, one of the richest sources of vitamin B-12 are clams. One cup of clam chowder, for example, contains a whopping 200% of your daily-recommended amount of vitamin B-12.

Ways to Enjoy
Clams can be baked, served in soups and chowders or added to your favorite pasta dish. However you choose to eat them, clams are both nutritious and filling.

Selenium is an essential element that is biologically important to mood regulation and much more. It’s involved in protein production, DNA synthesis and has protective properties against oxidative damage. Although most nuts contain selenium, Brazil nuts contain the greatest amounts. One ounce—six to eight nuts—provides more than 700% of our daily selenium requirement.

Ways to Enjoy
In addition to eating them out of hand, Brazil nuts can be added to salads, soups or baked goods. They are super-adaptable and can change and improve the taste of just about any food.

So much of the way we feel about ourselves and our well-being can be traced back to healthy eating habits. Focusing on mood boosting foods with key nutrients, coupled with smaller, more frequent meals throughout the day may be just the thing to keep blood sugars steady and your overall mood in check.

Baldwin, D. and Rudge, S. (1995). The role of serotonin in depression and anxiety. International Clinical Psychopharmacology, 9, 4.