The “7-Minute Workout” Gets Upgraded

by Jessica Matthews
on June 17, 2013
Filter By Category

It’s no secret—we all want better workout results in less time. As research continues to confirm the benefits of time-efficient, high-intensity workouts, it’s easy to see why everyone is so eager to kick their workouts up a notch. The desire to maximize fitness with as little of a time investment as possible became very apparent with the recent buzz surrounding one particular high-intensity circuit-training workout—dubbed by The New York Times as “The Scientific 7-Minute Workout”—which was published in a recent edition of the American College of Sports Medicine’s Health and Fitness Journal.  While news about this “new” fat-burning, metabolism-boosting workout quickly spread, what most people failed to recognize was this workout was merely one example of a high-intensity circuit-training (HICT) workout—a type of training that has been around for years and comes in a wide variety of forms. The authors of the famed 7-minute workout wholeheartedly acknowledged that this plan was simply devised to provide individuals with an example of a workout that matched the guidelines for an effective approach to HICT, identified by reviewing the findings of more than a dozen different studies on the topic.

While the 12 relatively basic exercises featured in the sample workout are tried and true, those seeking more variety in their workouts should check out these swaps to upgrade the famous 7-minute workout and elicit even better results. Perform each of the following exercises for 30 seconds, actively recovering for 15 seconds or less as you transition to the next move. And, if you have more than 7 minutes to spare—and really want to take your fitness to the next level—try completing the sequence two or three times for a supercharged workout in under than 30 minutes—which includes time for a dynamic warm-up and cool-down—that’ll have you looking and feeling your best this summer.

Instead of: Jumping jacks
Do: Icky shuffle

How to: Focus on fast feet as you move side to side with a 1-2-3 rhythm. Hop out onto the right foot then bring the left foot to meet it and finish with another leap out to the side with the right foot with the left knee up in the air.

Instead of: Wall sit
Do: Eagle pose variation 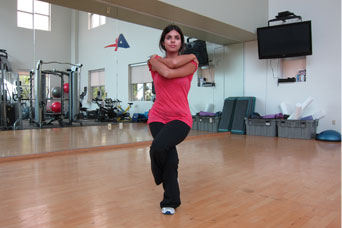 How to: Tune into your inner yogi by standing with both arms extended out in front of the body, palms facing the floor. Bend your knees slightly and shift your weight into your right foot, crossing the left thigh over the right, touching the left toes to the right ankle. Balance in this position, crossing the arms in front of the chest and placing the hands on top of opposite shoulders. Switch the cross of the arms and legs at the 15-second mark.

Instead of: Push-ups
Do: Plank-ups 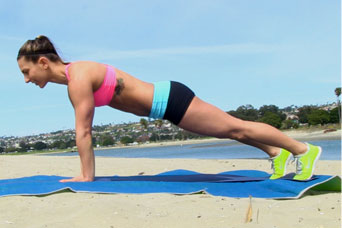 Instead of: Crunches
Do: High/low boat

How to: Sit on your mat with knees bent and feet flat on the floor. Pick up both feet up, keeping the knees bent 90 degrees as you come to high boat. Recline the torso back slightly as you keep the core engaged and the spine long. As you inhale, lower back with control to low boat, extending the legs out in front of you, hovering the arms, legs and torso close to the floor. As you exhale, rise back up to high boat.

Instead of: Step-ups
Do: Surfer steps

How to: For this summer-inspired move come to a high kneeling position with the right foot on the ground and the left knee down on the mat. With the right foot planted, push off of the right heel and jump your left foot up in front of your right, turning your feet and body to the side of your mat as you squat down—almost as if you were on a surfboard catching some waves. To return to your starting position, square your body to the front edge of the mat by pivoting on your right foot as you release to a modified lunge with the left foot now forward and the right knee on the mat behind you. Bring the left leg back so that both knees are back together in a high kneeling position before repeating on the opposite side, this time leading with the left foot. You can keep this move low-impact by skipping the hop and simply stepping the back foot up in front before squatting down.

Instead of: Squats
Do: Single-leg glute bridge

How to: Lie on your back with your knees bent and feet flat on the floor. Lift your left leg up and draw the knee into your chest, clasping your hands behind the left thigh. As you exhale, lift your hips off the floor until your body forms a straight line from your knees to shoulders. Avoid lifting too high, which can cause arching in the back. Switch sides at the 15-second mark.

Instead of: Triceps dips
Do: Triceps kickbacks 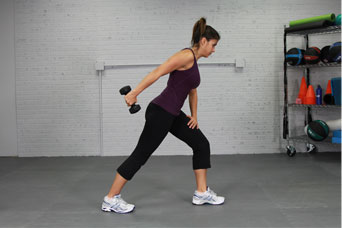 Instead of: Plank
Do: Walking planks 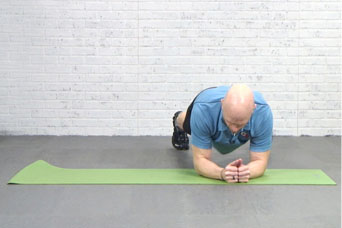 How to: From a forearm plank position, “walk” the length of your mat and back. Keep your core engaged and your shoulders and hips squared to the floor the entire time as you move the right elbow and right foot, followed by the left elbow and left foot.

Instead of: Running in place
Do: Lateral shuffles and cone hops

How to: Release your inner athlete and focus on your agility and speed by setting up five cones approximately 12 feet apart. Stand at the end of the cones in an athletic ready position and begin to shuffle sideways to the next cone, moving as quickly as you can. When you reach the next cone hop over it one foot at a time and prepare to shuffle to the next cone, repeating the sequence down the row of cones and back.

Instead of: Lunge
Do: Plyo lunges with toe drags 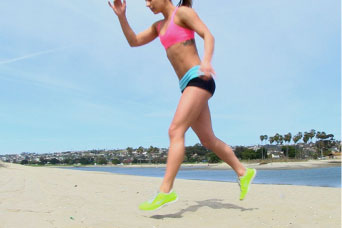 How to: Begin in an active lunge position with the right foot forward. Perform three toe drags, bringing the toes of the left foot up to meet the right as you align the knees, staying low in your lunge the entire time as you fire up the muscles of your backside. Once you’ve completed all three, jump and switch the position of your feet, coming to a lunge with the left foot forward and the right foot back. Repeat the three toe drags, this time with the right foot. Remember, you don’t need to make this move high-impact for it to be high-intensity—you can always opt to avoid going airborne and instead simply step up to switch the position of the feet.

Instead of: Push-up and rotation
Do: Push-ups with a twist

How to: From a high-plank position with hands positioned wide to the edges of the mat—or slightly wider—inhale as you bend your elbows, keeping them close to the sides of your body or allowing them to flare out slightly. At the same time, cross your left knee to meet your right elbow. Lower down in this twisted position keeping the core engaged. As you exhale, press up to return to high-plank position before repeating on the opposite side.

How to: Press up into a forearm side plank, with the left elbow below the left shoulder and the right arm extended upward. Thread the right arm underneath your body while keeping the core engaged, lowering your hips slightly toward the ground. Extend the right arm back up to the ceiling, while lifting the hips at the same time back to starting position. Switch sides at the 15-second mark.