What to Make of Milk?

by Natalie Digate Muth
on March 28, 2013
Filter By Category 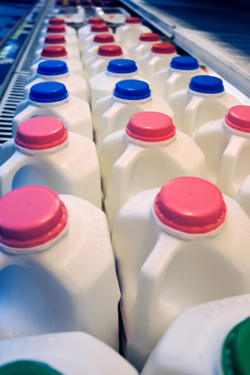 The U.S. Dietary Guidelines recommend that adults and kids older than nine years drink three cups of milk per day, that kids ages four to eight drink two-and-a-half cups, and kids ages two to three drink two cups. But do we really need that much? And if so, what kind of milk should we be drinking—cow’s milk, almond, rice or soy? Whole, 2 percent or skim? Organic or conventional? Is chocolate milk O.K., or at least better than juice? And what’s this latest news about milk manufacturers putting artificial sweeteners in milk and no longer wanting to tell consumers when they’ve used them?

Shopping for milk used to be simple. Not anymore.

Milk provides calcium and vitamin D, and is a good source of protein. The science is constantly evolving, but the current consensus is that kids and teens should consume 1300 mg of calcium and adults should consume 1000 mg of calcium, along with 600 IU of vitamin D, per day for bone strength and potentially many other benefits. The average child should get about 35 grams of protein (less for younger kids and more for teens), while adults should consume 50 grams of protein (less for women and more for men) to help maintain muscle mass and meet the body’s structural needs.

When choosing milk, start by reading the nutrition label to make sure that there is close to 30 percent of the recommended daily amount of calcium and 20 percent of vitamin D, and, ideally, at least 5 grams of protein per serving.

Many people have a variety of concerns about milk. Milk producers have devised a variety of solutions. Here’s a sampling:

The Solution
When it comes to buying milk, make an informed decision for your family based on nutritional value, taste preference and cost. The next time you puzzling over which milk to choose, this handy chart can help you make a decision that is just right for you and your family.