Ask the Pediatrician: Does Breastfeeding Lower My Child’s Risk of Becoming Obese?

by Natalie Digate Muth
on March 19, 2013
Filter By Category 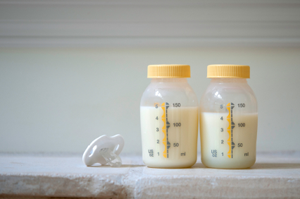 Pediatricians and other health professionals encourage mothers to breastfeed due to the considerable amount of research suggesting it benefits the health and well-being of both mother and baby. The evidence is compelling that breastfeeding helps moms to increase bonding with baby and decreases the mother’s risk of developing rheumatoid arthritis, cardiovascular disease, and breast and ovarian cancer. (Whether breastfeeding increases postpartum weight loss is uncertain.) Furthermore, breastfed babies have a lower risk of respiratory, ear and gastrointestinal infections; sudden infant death syndrome (SIDS); and allergic (asthma, eczema) and immunologic disease (celiac disease and type 1 diabetes)

It has been widely reported that breastfeeding also decreases the risk of childhood obesity. However, a few recent studies have cast doubt on that belief. First, a study published in The New England Journal of Medicine labeled this belief a myth and pointed out that the studies supporting the weight-control benefit of breastfeeding were extremely biased. Now, a study just published in the Journal of the American Medical Association says the same: Breastfeeding does not prevent childhood obesity.

For this study, researchers recruited 17,046 breastfeeding mother-infant pairs in Belarus. Half of the participants received intensive coaching to exclusively breastfeed based on Baby Friendly Hospital recommendations. The other half received “usual practice,” with no additional breastfeeding advice beyond what the hospital normally provides. The researchers found that breastfeeding duration and exclusivity increased in the intervention group (43% versus 6% exclusively breastfed at three months and 7.9% versus 0.6% at six months). Nearly 12 years later, the researchers followed up by measuring the children’s body mass index (BMI), waist circumference, skinfold thickness (a measure of body fat) and levels of the hormone insulin-like growth factor 1 (IGF-1), a marker of body fatness. The outcomes were no different between the two groups.

This study provides good evidence that breastfeeding in and of itself may not reduce risk of childhood obesity. However, the large number of other research-supported benefits of breastfeeding are compelling enough to continue to encourage and support moms in breastfeeding their babies. Plus, while breastfeeding itself may not protect against childhood obesity, it does offer a model of some important feeding strategies to help kids grow to be overall healthier (and less picky) eaters. For example, breastfed babies exposed to a wide variety of flavors from mom’s breast milk are more likely to be willing to eat those foods later on. Breastfed babies are also better at regulating intake—not so much because of the milk itself, but mostly because the baby is in total control of how much he or she eats. Bottle-fed babies (whether they are fed formula or breast milk) are more likely to eat based on the number of ounces provided in the bottle.

What Does This Mean For Me?

These research findings won’t change the general recommendation to breastfeed for at least one year,  ideally with six months of exclusive breast milk, for optimal health benefits for mom and baby. While the list of benefits of breastfeeding may be slightly shorter, with overweight and obesity no longer included, numerous other benefits continue to make breastfeeding the preferred choice for babies.

Here are some important tips for parents who are committed to setting the stage for their kids to grow to be healthy eaters and maintain a healthy weight: