Is all “Screen Time” Bad for My Preschooler? Maybe Not.

by Natalie Digate Muth
on February 27, 2013
Filter By Category 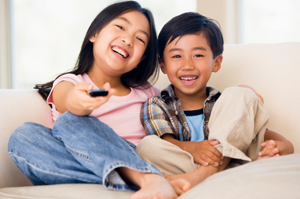 The mantra is well rehearsed by pediatricians, preschool teachers and child-development experts: Limit “screen time” (that is, television, video games, ipads, smart phones, Kindles, computer games, etc.) to two hours or less per day. The rationale is that too much screen time impedes a child’s development and promotes physical inactivity, childhood overweight and, in many cases, aggressive behavior. Despite these recommendations and warnings, the average preschool child spends 4.4 hours per day in front of a screen. In many cases, the content that young children are watching is inappropriate—either it is not educational or it is targeted at much older kids or adults.

But what if the content of the programming promotes “prosocial” behaviors like sharing, tolerance and empathy? Is the content of “screen time” as important, or perhaps more important, than the quantity of screen time? A new study published in the journal Pediatrics set out to answer that question.

Researchers from Seattle Children’s Hospital conducted a randomized controlled trial (the “gold standard” in research design) of what they termed a “media diet” intervention. A total of 820 three- to five-year-old children who had spent at least three hours per day watching television participated in the program along with their parents. Half of the children were randomly assigned to the “media diet” intervention and the other half received a nutrition intervention intended to improve eating habits. As part of the “media diet” intervention, parents received home visits, coaching, resources and phone follow-ups to help them replace violent or age-inappropriate programs with educational or “pro-social” content. No efforts were made to decrease the quantity of screen time.

When researchers followed up with the children at six and 12 months, they found that the children assigned to the “media diet” intervention watched less aggressive television and more prosocial television, scored higher in areas of social and emotional competence and experienced improved sleep. They also found that low-income boys benefited the most from being on the “media diet.” It is important to note that there was no significant difference in the amount of screen time between the two groups.

This is the first study to demonstrate that intensive efforts to provide more educational and productive media opportunities for young children decreases their aggressive behaviors and increases their social and emotional competence. The average preschool child spends more than four hours per day in front of a screen. To date, efforts to decrease the amount of screen time have only been marginally successful. Focusing not only on quantity of screen time, but also quality of screen time will help optimize early childhood development. Still, despite the benefits of educational programming compared to non-educational programming, ACE believes that it is important to enforce screen-time rules (accumulating no more than two hours per day) to help ensure that young children engage in at least 60 minutes of physical activity per day. While it is ideal if the physical activity can occur in natural environments with other children, ACE also recognizes that there are some health and fitness benefits to “exergaming” and other activity programs that rely on media and technology.

Making Sense of the Science

What does this mean for parents?