by Natalie Digate Muth
on February 19, 2013
Filter By Category 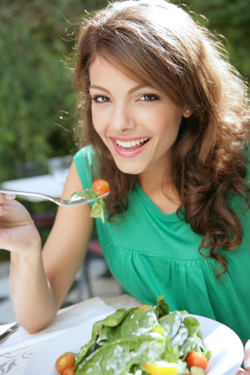 A widely publicized study conducted by Spanish researchers on the role of meal-timing and weight loss concluded that “eating late may influence the success of weight-loss therapy.” The study authors found that participants who ate an earlier lunch (the largest meal of the day in Spain) were more successful in losing weight than those who ate a later lunch (after 3 p.m.). Consequently, the study authors advised those attempting weight loss to include meal-timing as an important variable in a weight-loss plan, in addition to considering caloric content and macronutrient distribution.

This finding is in opposition to the common teaching that it is not so much when or even what you eat, but how much—that a calorie eaten at 10 p.m. is the same as one eaten at 4 p.m. So have we gotten it wrong? Is meal-timing a critical factor in helping people to lose weight and keep it off? Should we translate these study findings into everyday life and move mealtimes up a few hours and expect increased weight loss? Not necessarily.

In this observational study, the researchers classified 420 overweight and obese participants from a coastal Mediterranean town as either “early” lunch eaters or “late” lunch eaters based on self-reported meal intake. The “early” group tended to eat their main meal of the day (comprising about 40% of total calories) before 3 p.m. The “late” group tended to eat their main meal after 3 p.m. The participants all took part in a 20-week weight-loss program that consisted the Mediterranean diet, nutrition education, physical activity and behavioral change. Both groups consumed similar amounts of calories and had similar amounts of physical activity (based on self-reported questionnaires), blood levels of leptin and ghrelin, which are known as the “hunger hormones” (based on fasting blood sample) and sleep (based on self-reported questionnaire). The researchers found that the “early” group lost 5 more pounds than the “late group” (22 pounds compared to 17 pounds). They also had increased insulin sensitivity compared to the “late” group.

These findings parallel some work that has been done in animal studies. While the mechanisms are still being investigated, laboratory scientists recently found that adipose tissue has a circadian rhythm such that there are certain times of day when the tissue is more likely to either burn or store fat. Since feeding is a major source of energy for adipose tissue and circadian rhythm influences whether adipose tissue burns or stores fat, it is possible that alterations in meal-timing could play a role in the development of obesity and efficacy of weight loss. This understanding is in its infancy, however, with little research done to date that directly applies to humans.

It’s certainly possible that eating a late meal played a significant role in influencing weight loss in this study, but it may also be related to the finding that participants who ate late in the day also tended to skip breakfast. This prolonged fasting period followed by a large meal could set the cycle for dysregulation. Perhaps the headlines should have read: “Eat breakfast to hasten weight loss.”

Eating the main meal later in the day is unlikely to cause harm, however, this is an observational study with many limitations. It is unrealistic to expect that changing meal times will greatly enhance weight loss if caloric intake is not also reduced. Perhaps alterations to meal timing may just be “icing on the cake.”

Ultimately, the old rules hold true. If you eat more calories than you burn throughout the day then you will gain weight – whether the calories come from breakfast, dinner, or a late-night snack. The best plan to help manage weight – and avoid overeating -- is to pay attention to feelings of hunger and fullness and eat when you’re hungry and stop when you’re full. And if you find that most of your non-hunger eating occurs late in the day, eating your main meal earlier in the day may be just what you need to help achieve your weight management goals.