by Natalie Digate Muth
on February 05, 2013
Filter By Category 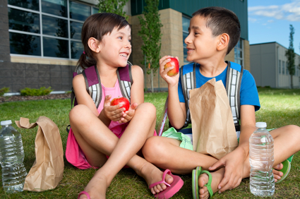 The school lunch revolution is in full effect at schools across the country. The meals are healthier, more nutrient-dense and low in added sugars, saturated fats and other food items known to harm children's health. While this update to the school lunch program has been important, the ready availability of unhealthy vending and snack foods has made lasting change to children’s nutrition status difficult to achieve. After all, if given a choice, most children will choose nutrient-poor sweet and salty foods over more nutrient-dense vegetables and fruits. This is especially the case for children used to eating a low-quality diet who have not yet developed a love for fruits, vegetables, whole grains and other healthy food items (see ACE's recent position statement for more information on the school lunch changes and challenges).

In alignment with the Healthy & Hunger-Free Kids Act of 2010, which was initiated to improve school nutrition, the United States Department of Agriculture announced the plan for "competitive foods' revolution coming this spring. With these regulations, schools that offer vending machines, snacks and a-la-carte items will be required to provide healthy, wholesome items. The junk-food counterparts will be off limits.

Specifically, the proposed regulations* will require that:

The proposed regulations allow exclusions for:

*the full text of the proposed regulations is available at www.regulations.gov

This will be the first update of snack food and beverage rules in schools since 1979. The timing is right as more than 2.5 million children and adolescents are overweight or obese, a tripling of the rates from just a generation ago (Ogden et al., 2012). Policies that restrict sales of unhealthy snacks and beverages in schools have been shown to improve kids' nutrition, reduce weight gain and increase food-service revenues. For example, when California cracked down on junk foods in high schools, students consumed 158 fewer calories per day than their counterparts in other states that allowed unhealthy options (Taber et al., 2012). Just a 64-calorie decrease in intake could reduce childhood obesity rates to the goals set by Healthy People 2020 (Wang et al., 2012). Schools that have strengthened policies for vending and a-la-cart food items in California, Connecticut, Texas, and West Virginia have reported increased revenue or no change in revenue after implementing the stronger standards.

It adds up that junk-food snacks at school play a major role in the poor nutritional status of U.S. kids. After all, kids eat 35 to 50 percent of their daily calories at school. On the whole, nearly 400 billion of those calories come from junk food in school each year. That translates into a collective 450 million pounds of fat in America's children.

The public comment period for these new regulations is now open. Stakeholders have 60 days to weigh in on the proposed rules. Expect widespread discontent from those companies that currently supply the vending-machine and snack offerings, and praise from school-nutrition advocates. Now is the chance to weigh in. Visit www.regulations.gov to leave a public comment sharing your views of how schools can best meet the nutritional needs of our kids. (Note: The report is supposed to be loaded on the Federal Register this week. Until then, it is available at http://www.fns.usda.gov/cga/020113-snacks.pdf. Once it is loaded, public comment will open.)

Agriculture Secretary Tom Vilsack may have said it best in a news release about the proposed rule: "Parents and teachers work hard to instill healthy eating habits in our kids, and these efforts should be supported when kids walk through the schoolhouse door." Increasingly, parents have a stronger ally from schools in the pursuit to raise a generation of healthier, more active kids.

Institute of Medicine (2007) Nutrition standards for foods in schools: Leading the way toward healthier youth.

Should my child take a multivitamin?