6 Moves to Kick Your Way to Fitness

by Stephanie Thielen
on January 16, 2013
Filter By Category

You don’t need to be a prizefighter to reap the benefits of a workout that incorporates punches, jabs and kicks. Aside from being an excellent avenue for stress relief, kickboxing is a great confidence builder and a fun way to become a lean, mean, fighting machine. It increases your agility and coordination, and shapes up almost every muscle in your body.

Tap into your inner fighter with six moves that target your arms, legs, butt and core for a total-body workout.  Here’s how it works:

Each 4-minute round incorporates four exercises you’ll perform for 1 minute each over the course of one song. Begin with warm-up exercises like shuffles, arm reaches, jump rope and knee lifts, and be sure to end your workout with deep breathing and stretches for your upper and lower body. 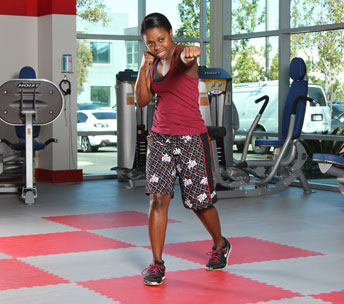 Begin in right boxer’s stance with your right foot forward, left foot back. Your arms should be in the ready guard position with elbows bent, fists closed and close to your face. Punch with your right arm (jab), then punch with your left arm (cross). Visualize the target to be at about the same height as your opponent’s nose.

Begin in a split stance position with your right foot in front, left foot in back. Lower down into the lunge, and then kick to the front with your left leg. Throughout the movement, you’re your arms in ready guard position. Visualize the target to be at about the same height as your opponent’s hips. 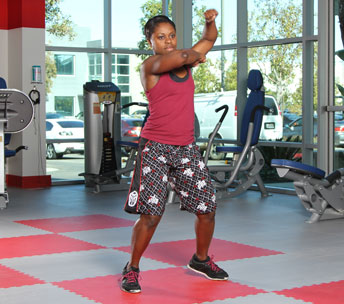 Lift your arms up in front of your forehead, parallel to the floor with your fists closed and your elbows wide. Shuffle side to side and circle your arms rapidly around each other as if you’re hitting a speed bag. Visualize the target to be at about the same height as your opponent’s nose.

With your arms in ready guard position, lift your right knee toward your chest like you’re performing a knee strike. Place your right foot down, and then kick your left leg toward the back, striking with the heel of your foot while keeping it flexed. Be sure to keep your arms up throughout the movement. Visualize the target to be at about the same height as your opponent’s hips. 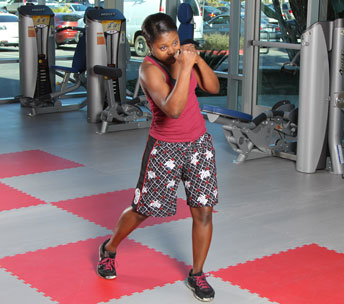 With your arms in ready guard position, put your feet hip-width apart with a slight bend in the knees. Pull your right arm back toward your hips, and then punch in an upward motion. Repeat on the left side. Be sure to keep your arms up throughout the movement. Visualize the target to be at about the same height as your opponent’s chin.

Begin in horse stance with your feet wider than hip-width apart, knees bent, and toes turned out to about 45 degrees. Step your right foot in and lift your left leg up to the side with your heel toward your glutes. Extend your knee into the roundhouse kick, striking with the top of your foot, toes pointed. Visualize the target to be at about the same height as your opponent’s chin.

Round 2: “Goin’ In” by Jennifer Lopez feat. Flo Rida

Interested in more ways to train like a fighter? See if you can go all three rounds in this MMA-inspired circuit workout!