by Michael Mantell
on January 03, 2013
Filter By Category 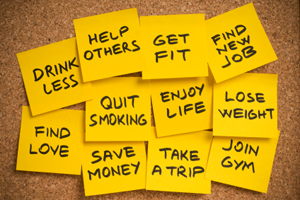 The New Year for many, it's been said, "is a new start on old habits." And given the number of people who make, talk about, write and read about resolutions at this time of year, you'd think nearly everyone would be adopting new, healthier habits on January 1. But these intentions are simply "cultural procrastinations," according to the way some psychologists look at the ineffective ways people try to reinvent themselves.

Fewer than half of all Americans make resolutions, and of those who do, most don't actually keep their new habits. Seventy-five percent of us keep our resolutions for about a week. That figure drops to about 71 percent after two weeks, and after a month only about one-third of us are still maintaining our promises to make positive lifestyle changes. By the summer, fewer than half of us can even remember our resolutions, let alone keep them. Hence the expression, "A New Year's resolution is something that goes in one year and out the other."

The Psychology Behind Resolutions

The American Psychological Association suggests five steps to creating the new neural pathways necessary to stay on the resolution bandwagon:

Are you really prepared and properly motivated to change your habits—especially your unhealthy lifestyle choices? Is this just another example of setting yourself up with false hope? Do you really believe your affirmations that you'll exercise more, eat less and be kinder to yourself and others? Have you written down your resolutions? Are your goals so broad that they don't really allow you to know if you ever reach them? Do you become quickly and easily discouraged, telling yourself it's "all or nothing?"

These are just a few of the psychological reasons New Year's resolutions turn into a yearly relapse. Rather than focusing on what can go wrong, I'd like you to focus instead on what can go right.

According to scientists, willpower, or mental energy, is at least part of the answer, and is greatly influenced by the amount of glucose in the bloodstream, which we deplete whenever we exert self-control. In their 2011 book, Rediscovering the Greatest Human Strength, Roy Baumeister and John Tierney note, "No glucose, no willpower." So it seems that one way to amp up your willpower may be physiological—eat foods with a low glycemic index, veggies, nuts, raw fruits, cheese, meat, olive oil and fish.

Furthermore, exercising self-control in one area of your life appears to help increase your willpower in other areas as well. In other words, preventing yourself from ever being tempted, making it virtually impossible to not exercise, making it unthinkable to eat what you resolved not to, is an important part of success. Baumeister and Tierney recommend meditation for improved attention and willpower, and establishing clear rules for behavior. I call this making SMARTER goals, which are specific, measureable, achievable, realistic, time-bound, enthusiastically created and filled with rewards.

1.  Create a very detailed road map with short-term measureable goals and plan ahead to deal with inevitable obstacles.
2. Write down your SMARTER goals with completion dates. If you fail to plan, then you are planning to fail.
3. Pretend it's the end of 2013 and you have accomplished your goal(s). Write a letter to yourself describing what you did over the "past year" to accomplish your goal. This will be your plan going forward.
4. Get someone to cover your back, such as an ACE Personal Trainer or Health Coach. The more people you talk with about your goal(s), the better—we all need partners in our success. Enlist as much support publically as you can through social media such as Facebook, Twitter and Pinterest.
5. Never "wait to feel like it." Do it even when you don't feel like it. Visualize having accomplished your goal(s), and act like you already have. Tracking progress is critically important, as are small, frequent rewards.
6. Think of setbacks as "pauses," not the end of the trip. No need to sweat it. Remember, the day starts anew tomorrow.
7.  Start your day off in the best possible way by getting good sleep the night before and by fueling with a healthy breakfast in the morning to help you focus on willpower.
8. Stay ready. Keep your gym bag packed at all times and have your self-talk ready to counter negative thinking.

"Be always at war with your vices, at peace with your neighbors and let each New Year find you a better person." -Ben Franklin

Ready to put these tips into practice and set your resolution for 2013? Share it with us through our Resolution Evolution app, and let us support and motivate you to live your most fit life this year!