Is Tim Tebow Too Big to Be an NFL Quarterback?

Tim Tebow, quarterback for the New York Jets, has become one of the biggest quarterbacks in the league after bulking up to 250 pounds in the offseason. According to Tebow, his decision to add weight was so that he could be bigger and stronger to take hits from the opposing team. This decision, however, has left many people scratching their heads. Tebow, they argue, should be working on throwing mechanics and accuracy instead of increasing strength and size, because this will only hinder his precision and flexibility.

What makes a good athlete?

There are many factors that go into any athletic performance, including that of a professional quarterback. In most sports, form fits function. In other words, the best performers you see in a given sport possess the precise combination of genetics and training to optimally perform. It is no coincidence, for example, that most elite male marathoners weigh less than 140 pounds or that most NFL (and even college) lineman are over 300 lbs. In addition to the right physical attributes, athletes must also possess things like speed, power, agility and quickness, which are honed through training. And finally, elite athletes must also posses the necessary sport-specific skills and mental focus to succeed.

What makes a good quarterback? 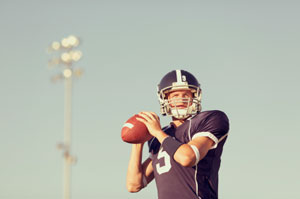 In recent years, height has become a preferred quality among NFL quarterbacks. Today, most quarterbacks are taller than 6 feet, which allows them to see over the oncoming defense and avoid having their passes blocked. One notable exception is New Orleans Saints quarterback Drew Brees, who has been successful, in part, by compensating for his shorter stature with a deeper fade back and high release point. Another quality to look for in a quarterback is the ability to pass the ball quickly and accurately. In the training sciences, this is referred to as reactivity or readiness. Many trainers of professional athletes now combine reactivity drills with agility and mobility. The more specific the training, the better the performance will be in that situation. This is known as the SAID principle: specific adaptation to imposed demands.

So how can Tebow’s big size be an asset? As the article mentions, other big quarterbacks such as Daunte Culpepper, JaMarcus Russell and Byron Leftwich have not performed that well due to inaccuracy in passing and a lack of flexibility. Flexibility is compromised with strength and vice versa, and while many athletes can compensate the biomechanics for limited flexibility, sooner or later an injury will likely occur. When a quarterback is also a good running back, however, increased size can have its advantages, but it can also set up the quarterback to take some season- or even career-ending hits. Being able to dodge oncoming rushers (agility) is a critical skill in football, and the NFL is full of fast, strong linebackers and linemen who train specifically to gain speed and agility. Even though the quarterback will not be able to out-power the rushers, it is more difficult to take down a bigger, stronger man. It is especially hard to take down a quarterback who is strong, fast and knows how to evade the rushing defense. Most top quarterbacks in the NFL possess all of these assets.

Tebow should realize that no coach will put him in if he can’t fulfill his primary role of completing passes with accuracy and a short release time. Functional training, focusing on perfecting his flexibility, accuracy, throwing biomechanics, agility and mobility, would serve him best in his quest to become a quarterback who not only runs well, but also throws well. Tebow clearly has the work ethic—now he just needs to focus that work in the areas that will serve him best. Train smarter and harder!

4 Fun Fitness Classes You Should Try in 2013