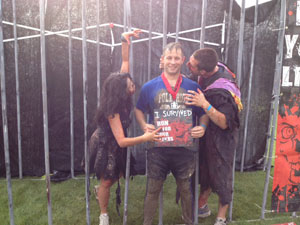 Zombies scare me. Ever since I saw my first Living Dead movie I've been fearful of an attack from reanimated corpses. While I know that the likelihood of a zombie plague is virtually non-existent, the recent popularity of Walking Dead (the popular television show that just started its third season) and a resurgence of zombies in pop culture have given rise to discussions about whether or not a "zombie apocalypse" could actually occur. And, if it could, what would be the best way to prepare for it? Just to be clear, I'm not the only one considering the possibility of a zombie scare. Various organizations such as the Zombie Research Society and ZITS (Zombie Institute for Theoretical Studies) at the University of Glasgow in Scotland actually exist, and compile various references and resources related to the zombie genre.

Let's be honest, though—there are numerous physiological reasons why a dead corpse is not able to come back to life, so it really is not a serious point of concern. However, IF (and that is a huge IF) a zombie plague were to occur, what would be the best exercise program to get in shape for escaping and evading hordes of walking corpses yearning for human flesh? The right exercise program can give you the strength, power and endurance necessary to escape and survive almost any attack. And, given this spooky season, there's no better time to discuss how to best train to develop the necessary fitness to survive a zombie horde.

In the movies, zombies are portrayed as slow, shuffling creatures that lurch forward with relatively little coordination. If real life imitates the movies (because that happens all of the time, right?), then it should be relatively easy for a fit person to run away from one or two individual zombies. To be sure that you have the fitness to run to safety, don't just go for long runs; instead, start adding in some high-intensity interval training (HIIT) and focus on short bursts of fast-paced sprints. Two key benefits of sprint intervals are increased speed and enhanced aerobic recovery, both of which will be very helpful in running away from the living dead. Another benefit of HIIT is an increase in post-exercise oxygen consumption, which means that your body will continue to burn calories for up to a few hours as it returns to a normal, resting state after the high-intensity exercise.

Here is a sample sprint workout to boost speed and aerobic capacity, both of which are necessary for avoiding zombies. The most effective way to program for sprints is to identify the ratio of performing physical work (sprinting) to active recovery. Allow for at least two days of rest between HIIT sprint workouts for optimal adaptation and recovery.

During a zombie attack it is also important to have the upper-body strength and coordination necessary to be able to scale a building, move objects to create a barrier, climb a fence, throw things at staggering corpses or otherwise scramble away from the outstretched hands of the undead. Here is a sample total-body program, with an emphasis on upper-body strength and power to help prepare for a potential zombie plague.

My fascination with zombies has led me to participate in a couple of "zombie runs"—obstacle-course races that feature actors dressed as zombies that try to steal a football-type flag from you while you're running away (much more preferable than being eaten alive). Even if you scoff at the idea of ever having to escape the living dead, doing strength and power exercises along with high-intensity sprints is not only a great (and hopefully effective) way to train to survive a zombie attack, it's also ideal for burning calories and increasing lean muscle, both of which will help you to look great when you come across other survivors.

How Can I Help My Children Have a Healthier Halloween?