You Should Be Dancin! 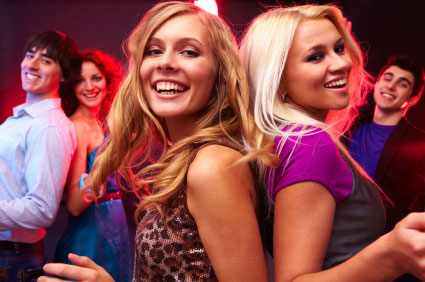 Thanks to recent research commissioned by the American Council on Exercise, we now know with certainty what we always felt to be true. You can burn a significant number of calories with an hour of moderate-intensity dancing—in other words, dancing hard enough to break a sweat while breathing steadily, with dance floor conversation limited to short, two- to three-word sentences such as, "Work it sister!" and "You're owning that!" Torching approximately 300 to 400 calories while shaking your groove thing has got to go on record as one of the more enjoyable ways to exercise, largely because it never really feels like exercise at all!

Here are two fun ideas to get you up and moving. The first suggestion is suitable for even the shyest wallflower, while the second offers choreography and music selections to satisfy the hippest dance diva.

You've heard the adage, "Dance like no one is watching," so let's start there. You're in your living room and really, no one is watching. Fire up the DVR or Apple TV or access your Hulu account and pull up last season's episodes of GLEE. With remote control in hand (for use as an impromptu microphone, of course), scroll through to the first song-and-dance number in any show. I recommend starting with Episode #16 of Season Three, "Saturday Night Glee-ver." Its disco theme means high-energy dance is featured throughout. Or try Episode #21, "Nationals," where the competition heats up and several longer performance numbers are yours to enjoy.

Next, pick out one or two moves performed by your favorite Gleek and repeat those steps throughout the song. Get creative with your arms, change directions, and make the movements bigger and bigger until you are using all the space around you. You probably won't be show-choir-ready after your first session, but that's not the point. Are you smiling? Are you singing? Are you breathing hard? Good. After one "rehearsal," rewind back to the start of the number and repeat the song, this time choosing two or three different dance moves to practice.

Divas to the Dance Floor, Please!

If you're the kind of girl (or guy) who is free of inhibitions or possesses a degree of dance training that rightly puts you on center stage, it's time to up the ante. Dancing is always more fun in a group, whether it's girlfriends getting amped up for a Saturday night out or a few of you reliving the "good old days" at the dance studio. A dance party needs a pumped-up playlist, and dance divas require signature moves that match the music. Try the tracks below paired with the dance steps that follow the structure of each song. The moves are simple, so of course you and your friends get extra points for embellishment. Keep the party going with a song-by-song contest where the group votes for their favorite dancer at the end of each song. And don’t forget to strike a pose.

"Gettin' Over You" by David Guetta, feat. Chris Willis, Fergie and LMFAO (3:08)
Verse: Swing hips around to the right two counts and to the left two counts.
Bridge: Pogo step by jumping right, left, hold right. Repeat to the left, then take a quick breather (grab a drink of water when the music slows down for a few moments).
Chorus: Throw your hands in the air and shift right/left/right in a single, single, double rhythm. Repeat to the left.

"Turn Me On" by David Guetta, feat. Nicki Minaj (3:20)
Verse: Step to the side, sitting into the hip; pick up opposite knee low while crossing opposite elbow over body. Alternate sides.
Bridge: Get low and move in slow motion with feet and arms apart.
Chorus: Strike a pose for two counts, two times; move sexy-style for four counts. Repeat three times and then stay with sexy-style move to finish chorus.

Now that you are warmed up and everyone is feeling loose, why not pull up this newest YouTube phenomenon and see who's got the best "Gangnam Style" moves? Not only can you burn some calories (depending on the enthusiasm you bring to your Gangnam-stomp, you could burn approximately 150 to 200 calories per half hour, which is similar to other types of aerobic dance), you might even end up with a new video to post on your Facebook page. If you do, tag me!