Is there a nutritional difference between fresh and canned foods?

by Natalie Digate Muth
on June 19, 2012
Filter By Category 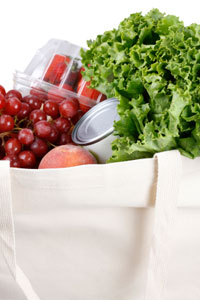 Fruits and vegetables are nutrient-dense, low-calorie health foods that help to optimize health and wellbeing, including controlling weight and warding off disease. Despite their numerous well-established benefits, the average American eats far too few fruits and vegetables each day, and most people get nowhere near the recommended five to nine daily servings.

Clearly, there is a disconnect between what people know is best for their bodies and what they actually eat. In an effort to help encourage people to eat more fruits and vegetables, the federal government, through its dietary guidelines, encourages Americans to simply eat more fruits and vegetables, regardless of whether they are fresh, frozen or canned.

For many people, canned foods carry a special appeal. They're cheap, durable and readily available year round. A family on a budget, one located in a geographic area where fresh food is not locally produced, or one who's simply hungry for fruit, vegetables or legumes that are "out of season" can rely on canned foods to fill the void. But the question often arises – are canned foods as good for you as their fresh counterparts?

Produce destined for canning is picked at its peak ripeness, giving it maximal flavor and nutritional value. This is in contrast to many fresh fruits and vegetables which are picked only as they start to ripen so that they do not spoil on their several-day-long journey across the country – or sometimes even across several continents.

To prevent spoilage and food-borne illness, canned foods are blanched at very high temperatures to kill all bacteria, spores and other germs present in food.  Highly acidic foods like tomatoes and many fruits harbor few microorganisms and require only the temperature of boiling water to kill the organisms. Vegetables and meats with low acid levels require higher canning temperatures. After blanching, the food is sealed into an airtight container to prevent recontamination. Many water-soluble vitamins including B and C vitamins are mostly or partly destroyed in the process of blanching. This could lessen the nutritional value of a canned food compared to a locally-produced fresh food (fresh produce that has traveled long distances will lose a similar amount of nutrients as canned foods). The levels of fat-soluble vitamins (A, D, E and K), minerals, fiber, carbohydrates, protein and fat levels are unaffected by canning.

Oftentimes, sugary syrup or juice is added to canned fruit while salt is added to many vegetables to help retain flavor and avoid spoilage. These additions can take a very healthy fruit or vegetable and make it much less desirable than its fresh or frozen counterpart. To get around this potential loss in nutritional value, look for canned fruit that is "in its own juice." For vegetables, check the sodium content on the nutritional label and aim for vegetables with "no added salt" and without added butter or cream sauces. These are the healthiest choices, though you could also rinse the sugary juice or salt off of the standard canned fruits and vegetables and decrease sugar and sodium content by about 30 percent.

Ultimately, by the time they are consumed, most fresh and canned fruits and vegetables seem to be nutritionally similar. While there is variable loss in water- and fat-soluble vitamins depending on the post-harvest processing method, it turns out that the healthiest produce is the produce that you're actually going to eat!

Can You Go 3 Rounds in the MMA Fighter Circuit?