Winning Isn’t Everything: 5 Lessons You Should Learn From Kids

by American Council on Exercise
on April 27, 2012
Filter By Category 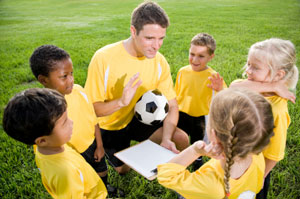 It’s no secret that working with kids isn’t always easy. They’re easily distracted, they often don’t’ like following directions and many simply aren’t interested in what you have to say.

Newsflash: most of them think you’re the problem.

New survey data released by i9 Sports states about 84% of kids (ages 8-14) surveyed said they quit or wanted to quit their youth sports team because it either wasn’t fun, their teammates were mean or scheduled practices interfered with their other activities.

As we wrap up National Youth Sports Safety Month, maybe it’s time to listen to what kids want. Here are 5 important lessons we should all learn to get them back on the field:

The short of it is when sports stop being fun, kids stop playing them. Check out these tips from Bruce E. Brown of Proactive Coaching LLC, on how you can become the kind of coach you wanted to play for when you were a kid:

When you make the commitment to coach, be the best you can be. Remember why you decided to coach in the first place – you love the game and the athletes. Choose them above winning. Instead of building a relationship based on criticism, build one on trust by choosing your words wisely.

Be a Master Teacher

Understand the game, the athletes and how to teach both.  When working with beginning players, put the love of the game first, then teach them how to play it. Stay organized and prepared, and keep instructions simple and clear. Motivate using both praise and confrontation.  Your success with athletes will be in direct proportion to your ability to plan, organize, teach and motivate.

Your players will hear what you say, but they’ll learn more by what you do and who you are.  Use your sport to intentionally teach lessons that can be used for the rest of life – perseverance, mental toughness, discipline, accountability, confidence, selflessness.   Model the behaviors you want to see in your athletes – competitive poise, quiet confidence, etc.   It is essential that you do this even in the most difficult times.  Accept and abide by the judgment of the officials.  Model and teach players to stay within the spirit of game.  Honor the profession by purposely, intentionally and consistently teaching and modeling character.

Be a Confidence Builder

Believe in your team before it’s successful.  Believe in them as people and competitors, regardless of their level of ability.  Allow them to experience and be accountable for both the successes and failures.  See beyond today in their lives.  Communicate value.  Be the face your team needs to see to perform fearlessly.

Be a Team Builder

Even if you’re coaching an individual sport, intentionally develop a team culture that includes behavioral expectations for all stakeholders (athletes, coaches and parents).   Being part of a team teaches kids to be a part of something bigger than themselves, and helps them accept and embrace a role that doesn’t always allow them to get their own way. Create a climate that is safe for athletes – physically safe but also safe to take healthy risks, safe from ridicule, safe from unnecessary outside pressure, safe to learn and challenge themselves.  Build your team using standards that athletes will rise to, not rules they will test.