by American Council on Exercise
on April 25, 2012
Filter By Category 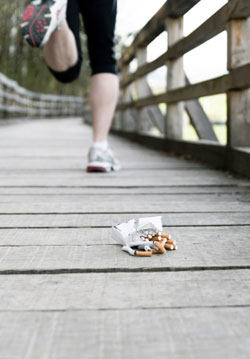 It’s no secret that cigarettes contribute to lung cancer, heart disease and numerous other illnesses, yet people still do it.

Despite a great number of states and 44 of the 60 largest U.S. cities enacting smoking bans, people across the country still light up outside work, bars and even their homes.

Data presented at the World Congress of Cardiology states exercise may not only help smokers quit and remain smoke-free, it increases life expectancy in both smokers and non-smokers alike. The study of 434,190 people in Taiwan between 1996 and 2008 revealed active smokers who participated in at least moderate activity were 55 percent more likely to quit than their inactive counterparts.

Dr. C.P. Wen, one of the project’s lead researchers, told the Congress, “If smokers can continue to exercise, not only (will they) increase the quit rate, but (they can also) reduce their mortality for all causes and for CVD (cardiovascular disease) in the long run."

Aside from getting your mind off your pack, there are loads of other benefits to using exercise as a way to quit smoking. Here are a few:

What are some good options to fuel my cardio, strength training and weekend workouts?