Exercise Can Change Genes in Minutes

by American Council on Exercise
on March 06, 2012
Filter By Category 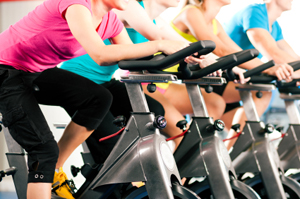 If you think that exercise doesn't affect your body because you're stuck with sub-optimal (in your opinion) DNA, time to think again. As reported by Science Daily, new research suggests that exercise can change DNA within muscle cells rather quickly — within minutes.

The study, published online Tuesday in Cell Metabolism, found that genetic molecules in muscle cells of 20 healthy men and women changed in ways after exercise that might help "turn on" genes that help make stronger muscles. The changes help muscles adapt to exercise.

Exercise caused what's known as epigenetic modifications. Methyl groups in DNA were lost as a result of exercise and this helped increase gene expression, or turned them on.

Researchers saw these changes after only 20 minutes of exercise on an exercise bike.

One of the researchers, Juleen Zierath of Karolinska Institute in Sweden, said "muscle adapts to what you do. If you don't use it, you lose it, and this is one of the mechanisms that allows that to happen."

Researchers also found that caffeine caused similar changes in the genes of muscle cells. But don't go out and drink coffee instead of exercising. Zierath told Nature that to see the effects on muscles, "one would need to consume a caffeine equivalent of about 50 cups per day, almost close to a lethal dose. Exercise is far easier if you ask me."

If you're ready to start experiencing exercise's many benefits, be sure to check out ACE's Fit Facts about getting started.