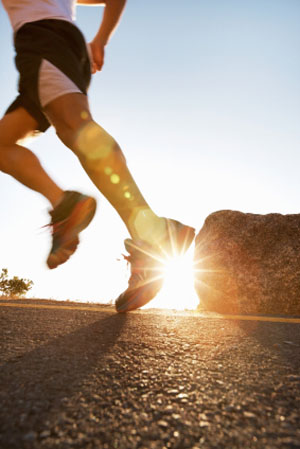 Many of exercise's commonly known benefits — increasing longevity, improving energy, increasing muscle mass, aiding in weight management just to name a few — tend to focus on the bigger picture of health and well-being. New research, including recent discoveries of a new exercise hormone, now shows how exercise benefits the body at a more microscopic cellular level.

A new study published online in the January issue of Nature shows that exercise accelerates the cell's ability to remove its own waste, the NYTimes reported. Basically, exercise allows the cells to speed the process that keeps them from becoming storehouses for cellular junk, and recycling cellular parts.

You may not have thought about cellular processes since high school biology class, but it's worth revisiting how busy our cells are because as the NYTimes reported, this new research "may be one of [exercise's] most valuable, if least visible, effects."

Cells accumulate a lot of waste every day just from regular maintenance, including fighting disease. So they collect "broken or misshapen proteins, shreds of cellular membranes, invasive viruses or bacteria and worn-out, broken-down cellular components, like aged mitochondria, the tiny organelles within cells that produce energy."

This process cells use to clean themselves in their usual growth, development and maintenance is autophagy, or "self-eating." They clean themselves by creating a membrane around the collected waste and then sending it to the lysosome where it's burned for energy or reused in another part of the cell (especially common during cell starvation). Our cells are efficient!

Augophagy is extremely critical to our health because it keeps our cells alive and a malfunctioning self-cleaning system could lead to diseases like diabetes, Alzheimer's or cancer. It also affects metabolism, Dr. Beth Levine, a Howard Hughes Medical Institute investigator at U.T. Southwestern told the NYTimes.

Knowing that autophagy rate increases in response to cell starvation or under stress, researchers tested what exercise did to the process using two groups of mice — one normal group and one group whose debilitated autophagy mechanisms could not be sped up.

When a normal group of mice ran for just 30 minutes, their cellular cleaning processes sped up. And when a group of mice that were not able to increase their autophagy rates ran, exercise did not have an effect on the rate.

Even more surprising, when both groups of mice were fed a high-fat diet until they developed diabetes and then ran, the normal mice were able to reverse the disease. On the other hand, the mice that were unable to clean out their cells any faster could not rid the diabetes.

This is a critical first step in understanding how any drugs or exercise programs can be used to accelerate autophagy, but that's still in the future. This research does show just how important exercise is — even at the cellular level.

In fact, Levine, the investigator, told the NYTimes that even though she never worked out consistently before, she now owns a treadmill.

Does this new research convince you to stick with, or start, your exercise routine?