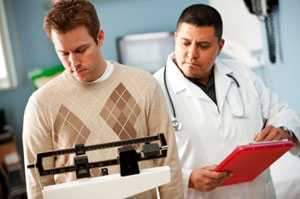 You may think that a doctor would objectively — regardless of his or her weight — be able to diagnose and appropriately care for an overweight or obese patient. New research suggests otherwise, Time Heathland reported.

Published in the online January issue of Obesity and led by researchers from the Johns Hopkins Bloomberg School of Public Health (JHSPH), the study found that overweight or obese doctors were less likely than physicians with normal body mass index (BMI) to discuss weight loss options with obese patients.

Even more surprising, researchers also found that heavier doctors were less likely to diagnose a patient as obese. If the doctors perceived the patients' weight to meet or exceed their own, they diagnosed them appropriately.

In other words, a doctor's fitness may matter if you're looking to get the truth about your weight and also receive sound weight loss tips.

Researchers surveyed 500 primary care physicians and of those, 30 percent of normal weight physicians discussed weight loss with their heavier patients while only 18 percent of the overweight or obese patients did. An overwhelming 93 percent of slimmer doctors versus only 7 percent of the heavier ones were likely to diagnose obesity.

These next numbers may provide a clue into why doctors' actions varied:

"I'd be surprised if this behavior [from doctors] is intentional. I think a lot of it is subconscious," Sara Bleich and assistant professor of health policy at JHSPH told Time Heathland. "What this study suggests is that physical attributes of physicians have a much bigger contribution to their care of patients than I realized before."

“I was totally surprised by the findings,” she said.

Doctors and other healthcare providers may be knowledgeable about health and our bodies, but they are still human and prone to fighting obesity as much as the rest of the population. In fact, ABC News reported on another study, which found that 55 percent of a surveyed 2,103 female nurses were obese.

ACE highlighted fitness in the workplace and increased collaboration among fitness and healthcare organizations as key objectives in its annual 2012 vision report for fitness in America. Getting doctors and nurses more fit by encouraging fitness in their workplaces and then empowering them with fitness information by working with fitness professionals may be another necessary layer of intervention to combat the country's obesity epidemic.

What do you think about this study's findings? Would you trust your doctor's diet and fitness advice if he or she did not appear to be fit?