Should I eat more (or less) soy?

by Natalie Digate Muth
on January 25, 2012
Filter By Category 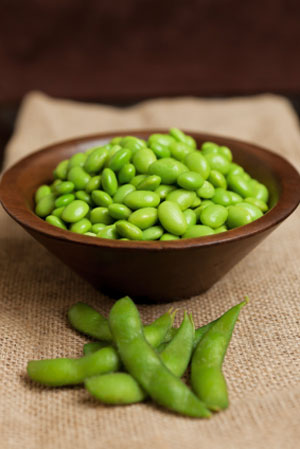 Many people trying to cut unhealthy animal fats and proteins from their diets have long turned to soy products. And recognition that soy-loving Japan saw lower incidences of breast and prostate cancer, hot flashes, and heart disease fueled American interest in soy as a possible mediator of good health. This also triggered a boon in soy research in the 1990s.

Soy is the only vegetable protein that contains all of the essential amino acids. It also is high in fiber and contains an abundance of vitamins and minerals with little saturated fat.

Many may recognize soy in its "whole" form – tofu, edamame and soy nuts –  but it's an additive in many more common food items, too.

For example, soy flour (50% protein) is often used in baked goods and as a meat substitute. Soy concentrates (70% protein) are commonly added to nutrition bars, cereals, and yogurts. And soy isolates (90% protein) and isoflavones (phytoestrogens that mimic estrogen) are highly digestible, and easily added to sports drinks, health beverages, and infant formulas.

Since it's widely available, low in cost and nutrient-dense, the soybean has been the subject of ongoing scientific investigation.

Shortly thereafter, the American Heart Association (AHA) released a statement concluding that "it is prudent to recommend including soy protein foods in a diet low in saturated fat and cholesterol." Food manufacturers eagerly diversified soy product offerings — including in the form of various soy supplements and additives — and grocery stores and consumers readily boosted their soy consumption.

But then, after a comprehensive review of the scientific studies available at that time, the Nutrition Committee of the American Heart Association released an updated statement in 2006, concluding that "the direct cardiovascular benefit of soy protein or isoflavone supplements is minimal at best."

The authors recommended against use of soy protein isolates (with isoflavones) in foods or pills, but went on to encourage consumption of whole soy products such as tofu, soy burgers and soy nuts that in addition to protein, contain high levels of non-protein nutrients — heart-healthy polyunsaturated fats, fiber, vitamins, minerals, and low levels of saturated fat.

Since the AHA's 2006 statement, the scientific research on soy in general and soy protein — and isoflavone in particular — continue to evolve, with mostly inconsistent findings.

What You Need to Know:

Once again, American consumers are left in the familiar situation of not knowing what evidence to believe. After all, the 1999 FDA health claim linking soy protein consumption to decreased cardiovascular disease is still on the books despite the AHA"s serious concerns about its validity. Meanwhile, it has been over five years — and hundreds of published research papers on the topic — since the AHA guidelines on soy were updated.

Taken together, it seems that while soy may not be the miracle food it was once touted to be, whole soy foods offer a generally healthy contribution to a varied and balanced eating plan. The fact remains that soy is loaded with high-quality protein, heart-healthy polyunsaturated fats, fiber, vitamins, minerals, and low levels of saturated fat.