What headphones are best for exercising outdoors? 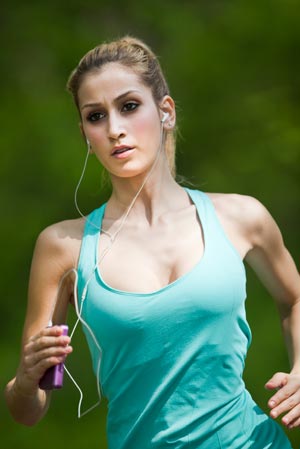 Selecting the right exercise equipment is important for comfort and function, and it can enhance the overall workout experience.

Similar to selecting running shoes or a bicycle helmet, the best headphones for one person might be a poor choice for another. Important factors to consider when selecting headphones include fit, acoustics, portability, compatibility with your music player, and if they stay on while you are exercising.  However, the most important question to answer before purchasing headphones to wear during exercise is, “will it be safe to wear headphones where you are going to exercise?” If you are exercising outdoors, the answer will often be “no.” Let me elaborate:

A few weeks ago, I was running trails in a canyon that is known for its steep rocky terrain and wildlife that includes many birds, big jackrabbits, coyotes, and rattlesnakes. Yes, rattlesnakes! Because I know that I might come across a rattlesnake, I pay very close attention while running or mountain biking there. Unfortunately, I cannot say the same for the other three people I saw on the trails that day.

The first was a man wearing headphones while running down a steep, twisty, rocky descent. Even though my feet made plenty of noise running down the hill as I caught up to him, the man did not hear me until I was only two steps behind him. Startled, he literally jumped a few feet to his left to get out of my way. Luckily, he did not land poorly or injure himself on the rocks.

The other two people I came across during that trail run were women wearing headphones—one walking solo and the other running solo. This might seem perfectly normal to some people; however, here are some good reasons why they would have been better off without the headphones:

These are just three examples from one trail run that I did on my lunch hour, but they illustrate some of the key reasons why headphones may not be appropriate for all exercise outdoors.

Music has been shown to be motivational for people during exercise, so the desire to wear headphones during exercise outdoors is understandable. Before you do, be sure to determine if the area where you will be exercising outdoors is safe for wearing headphones. If not, you are better off leaving them at home and enjoying the sounds of nature or the city. It could be the difference between hearing a person, car, or even a snake early enough to avoid a collision or worse.

A long-time exercise professional, Todd Galati currently serves as senior director of allied health and exercise science for ACE. In addition to a master's degree in kinesiology, he holds a bachelor's in athletic training and all four NCCA-accredited ACE certifications. Throughout his many years of experience, Todd has served as a professor, program director, research physiologist, personal trainer and coach.

by Todd Galati
on May 11, 2011
Load Previous Article
Brand Anthem