by Jessica Matthews
on August 17, 2011
Filter By Category 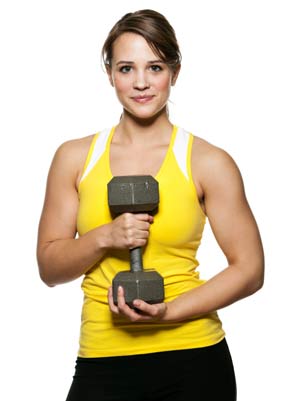 Turn on late night TV and you’ll see an array of products, programs and devices that promise to help you tone a certain area of your body in just minutes a day. This concept, often referred to as spot reducing, is based on the flawed notion that it is possible to burn off fat from a specific part of the body by selectively exercising that area and that area of the body only.  Research has shown that regular exercise (both cardio and strength training) in conjunction with a sensible diet is the only way to truly eliminate excess body fat, which is what is going to help those sculpted, toned muscles to become visible to the world. Research has been done however to look at some of the most effective exercises to help you strengthen the muscles in the three most commonly cited “trouble areas” of the body, specifically the butt (glutes), the core (abdominals), and the upper arms (triceps).

Sir Mix-A-Lot was on to something when he released his smash hit “Baby Got Back” in 1992. Almost two decades later many of us still aspire to sport a well-defined backside, and  research has helped us to pinpoint a few tried and true exercises that effectively strengthen and develop the gluteus maximus and gluteus medius, the two main muscles of that make up what we often refer to as our butt (or fanny depending on where you’re from).

Quadruped Bent-Knee Hip Extension - The name of this exercise may sound complex, but the truth is this easy to perform exercise can be done just about anywhere, using no equipment.  Research conducted by exercise scientists as the University of Wisconsin La Crosse found that the quadruped bent-knee hip extension elicited a higher degree of muscle activation (both in the gluteus maximus and minimus) than many other commonly performed exercises, and it can be an effective exercise option for those with knee issues who may have difficulty performing other standing glute exercises.

Forward Lunge - Another great exercise that can be done at the gym, at home, or in your hotel room while traveling, the forward lunge is a movement pattern that is performed not only during workouts, but also during activities of daily living, so proper mechanics are extremely important in order to perform this exercise effectively and safely. Once you become familiar with the forward lunge you can try different variations of the lunge to really challenge your gluteal muscles.

Step Ups -  What do you get when you combine a 12-15” step or box with a pair of dumbbells? A highly effective exercise for strengthen the glutes called dumbbell step-ups, yet another exercise which mimics actions in our daily lives. When performing this exercise, pay close attention to your knee, ankle and foot position, and avoid rolling the foot in or out when stepping up onto the platform.

Let’s talk abs. There has been research done that has looked at “traditional” abdominal exercises which has proven that many of the exercises commonly performed at the gym, such as bicycle crunches and stability ball crunches, are in fact effective at activating both the rectus abdominis and the obliques, two of the muscles which comprise what we often think of as our “core.” The problem is however that these exercises, while effective at engaging our abdominal muscles, also may result in a great deal of load being placed on our spines according to research. To spare the spine and also develop strong core function (and a more defined midsection if that’s what you’re into) try these exercises which not only strengthen the muscles of the core, but also focus on enhancing low-back stability.

Front Plank - The front plank (and also the side plank discussed below) is a great exercise to effectively target your abdominal muscles while building muscular endurance, which researchers such as Dr. Stuart McGill have found help to lower the risk of developing back issues later down the road. If you’re new to the front plank begin with holding this exercise for 5-10 seconds. As you build your endurance, you can begin to progress towards holding this position for 30 seconds to upwards of 1 minute.

Side Plank - Research has shown that the side plank not only effectively activates several key muscles of the core (the obliques, transverse abdominis and quadratus lumborum), but that this combination of muscle recruitment actually helps to ensure stability in the spine. As you become comfortable with this exercise you can progress to other variations, ranging from intermediate to advanced depending on your goals and ability level.

Bird-Dog - Although the name of this exercise might have you thinking of two different (yet equally adorable) animals, the reality is this exercise is highly effective in training the body how to stabilize the low back during movement while also providing a great challenge to abdominal muscles (specifically the rectus abdominis and transverse abdominis). When performing the bird-dog avoid holding the exercise for long periods of time (7-8 seconds should be all that you need); instead, focus on increasing the number of repetitions to build endurance as opposed to increasing the amount of time you hold the fully extended position.

One area of the body that tends to get a lot of exposure, especially during the summer, is the upper arms and many individuals (especially many of us women) express interest in wanting to reduce the amount of “jiggle” that we see when we sport our favorite tank tops which we can do by strengthening the triceps, the muscles located in the back of the upper arms with some research supported exercises.

Triangle Push-Up - A variation of the traditional push-up, the triangle push-up involves placing the thumbs and forefingers together with the hands directly underneath the chest. Just like the traditional push-up proper form is key, so if you’re new to performing triangle push-ups you may opt to perform this exercise with bent knees  keeping the hands in the same triangle position before progressing to the full plank position with the body.

Dips - Dips are a highly effective triceps exercise which can be done in the gym using dip bars or a weight bench, or it can be done at home using a sturdy chair. This exercise represents a relatively functional movement (think about the motions you go through when lifting yourself out of your favorite chair), but when done incorrectly it can place a great deal of stress on the shoulder joint, so be sure to focus on proper form throughout the movement.

Triceps Kickback - Using dumbbells (or  a jug of water or large canned good), triceps kickback is another exercise where proper form is imperative, not only for effectively targeting the triceps, but also for safety reasons in order to prevent any additional loading on your spine.  If you’re looking for guidance on proper form for this exercise (or any of the other exercises discussed here) in order to maximize your workout and ensure your safety, consider enlisting the help of an ACE-certified personal trainer.

6 Ways to Fine-Tune Your Lifestyle for Weight Maintenance