Are the calorie counts on exercise machines accurate?

by Julia Valentour
on July 06, 2011
Filter By Category 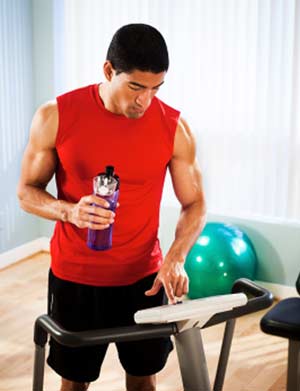 Probably not, as the reality is each manufacturer uses their own patented algorithms that take into account the workload and duration of the exercise.  Some equipment manufacturers do research to validate these formulas on a number of subjects.  The higher-end the machine, the more likely it is to use a validated formula.  A newer version of the same machine might even have a different formula in an attempt to improve its accuracy (if you have an older model and want to make sure you’re using the most updated formula, you can call the manufacturer who might be able to walk you through the upgrade over the phone).

Some formulas are based on the principle that during exercise, heart rate has a linear relationship with oxygen consumption, which can be easily converted to determine the number of calories burned.    However, heart rate is influenced by a number of things such as temperature, body position, food intake, muscle groups exercised, some medications, and whether the exercise is continuous or intermittent.

Ellipticals usually use a formula for walking but may be set up on a formula for biking.  This discrepancy often throws off the measurements from one elliptical to another.  Treadmills have been around longer and therefore these algorithms have been validated on more subjects, so they’re more likely to be accurate.  Ellipticals tend to err on the high side and can be as much as 20-30% off.

Some manufacturers claim that their machines burn more calories than treadmills due to the involvement of the upper body.  It is true that the more muscle mass that’s involved, the higher the oxygen requirement and the caloric burn—up to a point.Running uphill on a treadmill is going to produce the highest amount of oxygen consumption for most people.  Manufacturers who claim that their equipment burns more calories per minute aren’t giving you the full story.  Their unscientific “studies” may have used a very easy speed on the treadmill and a high setting on their piece of equipment.  This “research” probably won’t be found in a reputable, peer-reviewed scientific journal if it’s found at all.

Aside from workload and duration, there are other variables that affect the caloric expenditure that aren’t accounted for in these algorithms.  For example, body size will make a difference.  A larger person will burn more calories per minute on a given exercise at the same intensity because they have a bigger mass to move.  Also, the speed at which walking becomes running varies from person to person depending on body size, leg length, stride length and normal walking pace.  Speeds between 3.7 and 5.0 mph on a treadmill fall around this threshold where walking becomes running, so caloric expenditure is difficult to predict in this range.

Body fat percentage and fitness level can also make a difference.  A person with a greater percentage of lean muscle mass will burn more calories at a given intensity.  The person’s fitness level is also a factor as beginners are less efficient and therefore will burn more calories doing the same exercise than someone who does it regularly.   The type of exercise has an effect because these formulas work better for steady-state submaximal exercise than they do for interval-type workouts or high-intensity (anaerobic) exercise.  Also, if the user holds the handrails of a machine the caloric expenditure will be greatly overestimated since this reduces the actual work being performed.

So even if the readings are not exactly accurate, they are reasonable approximations that can be used as a general guideline to estimate your caloric burn.  They can be useful in comparing your workouts over time using the same piece of equipment.   To increase your caloric expenditure, progressively increase the duration of your exercise, increase the speed or intensity, and vary the type of cardio equipment that you use.

What are some tips for a healthier Fourth of July?