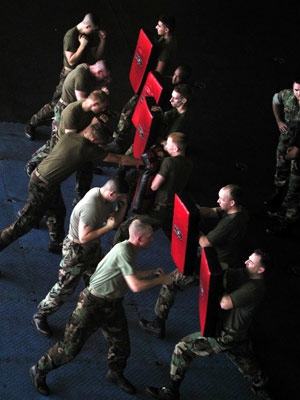 The recent article about the fittest athletes has prompted some interesting discussions between some colleagues and me. The discussions have centered on the fact that the article addresses many components of fitness such as cardiorespiratory endurance, strength, power and agility but leaves out an important component critical for athletic success — reactivity.

Endurance athletes such as runners, triathletes and cyclists as well as competitors in challenges like the CrossFit games can be extremely fit and strong, but these sports are based on cyclic, repetitive actions. They don't require athletes to react to an opponent’s movements.

The point is not to make light of endurance athletes’ accomplishments, but it’s simply to make the case that reacting to an opponent’s movements on a field of play, court or MMA octagon requires higher levels of fitness and skill than simply moving at a fast pace. Having the speed, agility and stamina to react to — or anticipate — an opponent’s movement makes the body work harder and elevates the metabolic response.

Being a fit runner with an efficient VO2 is one thing, but it might not necessarily carry over to a sport such as soccer, which also requires efficient cardiorespiratory endurance and in addition, requires reacting to an opponent to ensure a high level of success.

How does this relate to training a client?

This discussion has some relevant context for training a client in that recent research has been examining brain activity during exercise. Some initial findings report that in general, exercise promotes brain health. More specifically, exercises that require open skills — reacting to an unexpected stimulu — provide higher levels of neural activity than exercises that require closed skills — repeating a motion or performing a rehearsed routine. The end result is that performing open-skilled, reaction training can develop enhanced brain function while simultaneously developing other components of fitness.

Applying this research means that to increase the challenge and work rate of our clients’ exercise programs, we should think about how we can add reactionary drills to the training session. This is critical for older clients who might be interested in taking steps necessary to mitigate potential effects of onset dementia or Alzheimer’s disease.

Reactionary drills for athletes might require a trainer to include unexpected changes of direction in fast-paced agility drills. For older adults, reactionary training can be as simple as balancing on one leg and mirroring our movements or side-stepping or lunging in reaction to a verbal or visual cue.

Reaction or open-skilled training is the thought process behind the recent trend in utilizing games or free play during fitness sessions to make exercise more fun and dynamic. Try adding in some game-based or reactionary training to your training sessions and classes, and watch people have fun while improving both physical and mental fitness.

One more consideration for the fittest athlete:

Back to the discussion about the fittest athletes: The initial article left out the tactical athlete as one category (though it was mentioned in the comments).

Tactical athlete is a new term used to describe how first responders and military personnel are required to perform at high levels of operational fitness while reacting to incredibly stressful and challenging situations. My argument is that the fittest athletes are the military’s elite special forces units who undergo rigorous training to prepare for physical challenges that most of us can barely imagine. Operational fitness for the military’s special forces combines all of the facets of fitness: strength, power, agility, cardiorespiratory endurance as well as mental acuity to react to life-threatening situations.

The next time you’re watching your favorite sport, take a moment to think about the men and women serving our nation and the fact that they do so without the compensation and accolades bestowed upon professional athletes.

(This was written in part to honor one of my training buddies and friends who has recently deployed to Afghanistan with his Marine Recon unit. Good luck and God Bless.)

If you want to give back to our service members, pledge fitness training service hours through Joining Forces.

Ready to Train Your, or Someone’s, Grandparents?