Maintaining a healthy diet at home can be a challenge for many families, especially when they contain picky eaters. ACE Fit has compiled hundreds of appetizers, main dishes, desserts and more that double as delicious and nutritious options for your family. Search based on special diety considerations, ingredients you happen to have on hand, or the type of dish you need to prepare. 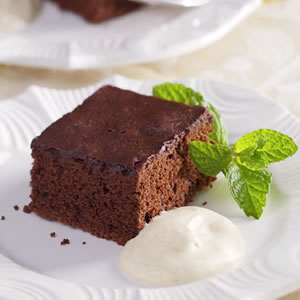 Sheet cakes are a potluck dream: the baking pan holds the cake and makes it wonderfully portable. This one is accompanied by an almond "cream" made from heavy cream and reduced-fat sour cream. Together, the cake and cream replicate the taste of Mexican chocolate with its undertones of almond and cinnamon. Or make cream cheese frosting and add 1/4 teaspoon almond extract.

To prepare cake: Preheat oven to 350 degrees F. Coat a 9-by-13-inch glass baking dish with cooking spray with flour. Alternatively, spray the pan with regular cooking spray, dust with flour and tap out the excess.

Melt chocolate in the microwave on Medium in 30-second bursts, stirring after each burst to ensure even melting, until completely melted. (Alternatively, melt the chocolate in a double boiler over hot water, stirring constantly.) Set aside.

Beat the remaining 1/2 cup granulated sugar, brown sugar and oil in a large bowl on medium speed until combined. Beat in egg yolks one at a time, then melted chocolate and vanilla, scraping down the sides of the bowl as necessary, until combined.

Bake until a toothpick inserted into the center comes out with a few moist crumbs attached, 25 to 30 minutes. Cool on a wire rack for at least 1 hour.

To prepare almond cream: Beat cream and confectioners' sugar in a medium bowl with an electric mixer on medium-high speed until the mixture is the consistency of sour cream, about 1 minute. Add sour cream, amaretto (or almond extract), vanilla and cinnamon; beat to combine. Serve the cake with the almond cream.