by Julia Valentour
on November 10, 2010
Filter By Category 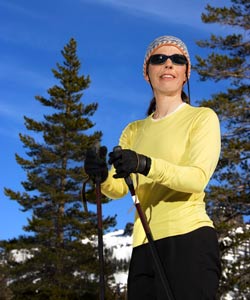 Do you burn more calories in the heat or in the cold? It seems as if the extra energy that is needed to keep you warm when exercising in a cold environment would translate into extra calories burned. However, exercise raises the body’s temperature on its own without needing to expend more energy to do this. In hot weather, it takes more cardiovascular effort to COOL the body, which occurs by pumping blood to the skin to promote sweating. Therefore, exercising in warm weather would actually use more energy than exercising at a temperature near freezing.

Cold weather doesn’t increase caloric expenditure unless, however, the body starts to shiver. When a person is shivering, the body needs to work harder to maintain thermoregulation (body temperature). According to Nancy Clark, M.S., R.D., shivering can burn about 400 calories per hour and it depletes glycogen stores and leaves you feeling fatigued (3). In this situation the energy expenditure in cold weather is greater than in warm weather, but the actual amount of additional calories burned due to shivering depends on the temperature, how long the person was exposed, and the type of clothing.

Other factors can cause weight gain during winter months. Inclement weather and less daylight can decrease activity. Winter blues, also known as seasonal affective disorder, is related to low levels of serotonin production (the feel-good hormone in the brain). It has been shown that eating carbohydrates increases the amount of serotonin in the brain, which may also be why we reach for a cookie after a tough day (4). Also, many people find it hard to resist the many high-calorie treats that are available in abundance during the holidays.