Starting Position: Stand to the left of the ladder with the feet approximately hip width apart.

Close-up: both feet are planted inside the ladder, maintain an athletic ready position with the hips flexed, spine straight and tall and the eyes looking straight ahead (not pictured).

Exercise Variation: When learning the drill, you can plant just one foot on the outside of the ladder, as you improve your skill and speed, you can bring both feet outside the ladder-plant the right foot, then bring the left foot outside the ladder to hit the ground next to the right before being moved to the next forward square.  Another variation is to keep your eyes off of your feet and looking straight ahead where your opponent would be during an athletic competition.

Keep your hips flexed with a tall, straight spine to ensure the athletic position throughout the entire range-of-motion of the drill. 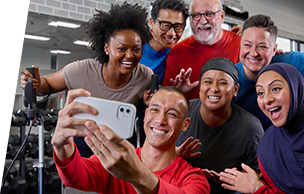