Ask the Pediatrician: How Can I Lower the Risk of My Baby Having a Food Allergy?

by Natalie Digate Muth
on March 12, 2013
Filter By Category 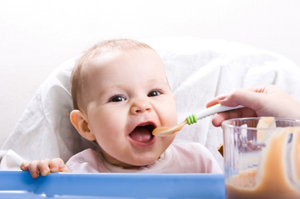 Many parents of infants eagerly await the milestone of introducing solid foods for the first time. When this milestone is reached (four to six months of age), pediatricians have long advised parents to introduce foods slowly and one at a time. This way it is easier to identify the culprit if an infant has an allergic response that can show up as anything from a mild rash to vomiting, cramps, diarrhea, eczema, hives and, in severe cases, anaphylaxis (throat swelling and difficulty breathing).

For infants, the most common allergy-causing foods are milk, eggs, peanuts, soy and wheat. Tree nuts, shellfish and fish are common causes in older kids and adults. An allergic reaction occurs when a protein or other component of a food causes the same reaction every time the child is exposed to that particular food. It is relatively uncommon, occurring in 2 to 8 percent of infants and children under the age of three years.

While pediatricians still urge parents to introduce one new solid food about every three to seven days, most pediatricians have abandoned the old recommendation to avoid highly allergic foods until at least one year of age. Foods like fish and eggs, and foods containing peanuts may be introduced at four to six months when other first foods are introduced. In fact, introducing these foods prior to a child’s first birthday may lead to decreased risk of food allergy later. (The one exception is milk, which should be delayed until at least one year of age due to an infant’s inability to absorb and digest milk. Milk also lacks the necessary vitamins and minerals found in breast milk and formula.)

In addition to better understanding when and how to introduce foods, a growing body of research suggests other steps parents could take to reduce allergy risk. Here is a summary of our latest understanding:

If you have concerns that your child may be demonstrating signs of a food allergy, you should discuss your concerns with your child’s pediatrician.

*Post adapted from “Eat Your Vegetables” and Other Mistakes Parents Make: Redefining How to Raise Healthy Eaters (Healthy Learning, 2012).

How Can I Help My Child Avoid Sports Injury?