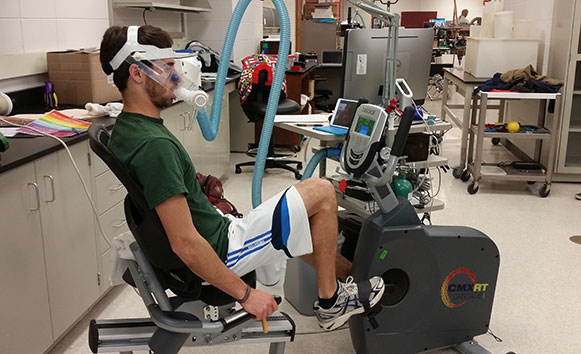 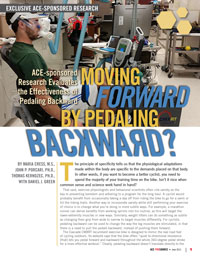 The principle of specificity tells us that the physiological adaptations made within the body are specific to the demands placed on that body. In other words, if you want to become a better cyclist, you need to spend the majority of your training time on the bike. Isn’t it nice when common sense and science work hand in hand?

That said, exercise physiologists and behavioral scientists often cite variety as the key to preventing boredom and adhering to a program for the long haul. A cyclist would probably benefit from occasionally taking a day off from riding the bike to go for a swim or hit the hiking trails. Another way to incorporate variety while still performing your exercise of choice is to change what you’re doing in more subtle ways. For example, a marathon runner can derive benefits from working sprints into his routine, as this will target the lower-extremity muscles in new ways. Similarly, weight lifters can do something as subtle as changing their grip from wide to narrow to target muscles differently. For cyclists, pedaling backward can be used to change the way the leg muscles are stimulated, in that there is a need to pull the pedals backward, instead of pushing them forward.

The Cascade CMXRT recumbent exercise bike is designed to mimic the real road feel of cycling outdoors. Its website says that the bike offers “quiet bi-directional resistance [that] lets you pedal forward and backward throughout the whole 360-degree pedal stroke for a more effective workout.” Clearly, pedaling backward doesn’t translate directly to the movements performed during a typical bike ride, whether it’s around your neighborhood or through the mountains of France. But can pedaling in reverse provide benefits beyond—or in addition to—those seen with regular cycling?

But Is Pedaling Backward Safe?

There is some controversy about whether pedaling backward is safe, both in a physiological/muscular sense and in terms of basic bike safety. According to www.spinning.com, their bikes are not designed for pedaling backward: “Pedaling backward is risky on a fixed gear bike. If riders try to quickly stop the flywheel while pedaling backward, the compressive forces on the knee joint can be sufficient enough to tear cartilage or the meniscus….Lastly, this movement puts the bike at risk as well. Pedaling backward may eventually unscrew the pedals from the crank arm.”

A quick Google search will tell you that there are plenty of people out there dismissing the benefits and exaggerating the risks of pedaling in reverse. Dr. Porcari disagrees: “Physiologically and muscularly, there is no downside.” In fact, backward pedaling is often used as a rehabilitation tool. It's been observed to reduce pressure on the tibiofemoral joint, which may offer value in the rehabilitation of meniscal problems or tibiofemoral osteoarthritis.

Of course, bike safety is another issue entirely. Before telling participants in a group exercise class or a personal-training client to start pedaling backward, be sure that the bike you are using is designed to do so. It is important to note that this research was not conducted on a fixed-gear cycle, but rather on a specifically designed recumbent bike that provides resistance in both directions.

A research team at the University of Wisconsin–La Crosse, led by John P. Porcari, Ph.D., conducted an ACE-commissioned study to determine potential differences in the physiological and electromyography (EMG) responses when pedaling forward and backward on the Cascade bike.

Sixteen apparently healthy volunteers (eight male and eight female) were used as subjects for what was essentially two separate studies. The first study evaluated the potential differences in heart rate (HR), oxygen consumption (VO2), and caloric expenditure when participants cycled forward and backward on the Cascade cycle. A practice session was performed to allow participants to get habituated to the bike and to determine the workloads that would be used in the study. For each subject, workloads were selected that elicited ratings of perceived exertion (RPE) of 11, 13 and 15 on the 6 to 20 scale while pedaling in the forward direction.

The participants completed six five-minute submaximal exercise bouts (three while pedaling forward and three while pedaling backward). Half of the subjects pedaled forward first, then backward, while the other half did the opposite. Workloads were progressed from RPEs of 11 to 13 to 15 with each exercise bout, with two-minute breaks between them. There was also a 10-minute break during the changeover between pedaling directions. Heart rate was assessed each minute and VO2 was measured continuously as the participants cycled.

The purpose of the second study was to determine the differences in muscle usage when subjects cycled in the two different directions. The study design described above was performed again, but this time EMG activity was recorded from eight muscles of the lower extremities: tibialis anterior, medial gastrocnemious, vastus medialis, vastus lateralis, rectus femoris, biceps femoris, semitendinosis and gluteus maximus. Data were collected for approximately 20 seconds at the end of each stage.

For study 1, there were no differences in the physiological responses of males and females. The aggregate data are presented in Table 1.

Overall, there was a significantly higher HR (8 beats per minute) when cycling backward than when forward, which was consistent across all three workloads. VO2 and caloric consumption were also significantly higher in the backward direction (8 percent higher at any given workload). In terms of RPE, the 11, 13 and 15 values, which were determined when the participants were pedaling forward, became 11.5, 13.9 and 16.5 when the direction was reversed—this means that the study participants felt like they were working harder when they pedaled backward even though the actual workloads were identical.

For study 2, there were again no differences between the men and women. While there were no significant differences in the EMG values between forward and backward cycling for the tibialis anterior, medial gastrocnemius, semitendinosis, biceps femoris or gluteus maximus, there was significantly higher EMG data for the three quadriceps muscles tested—the vastus medialis (17.5 percent higher), vastus lateralis (11.1 percent higher) and rectus femoris (13.1 percent higher)—when participants pedaled backward. This finding was consistent across all three workloads (Figures 1–3). 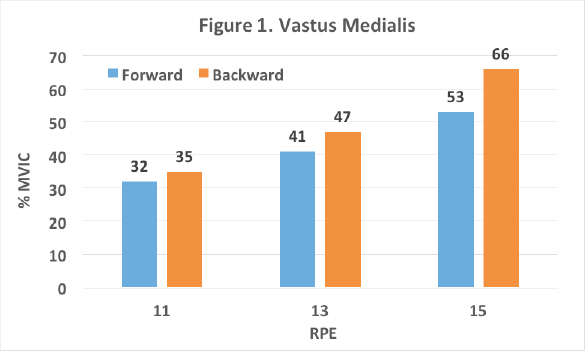 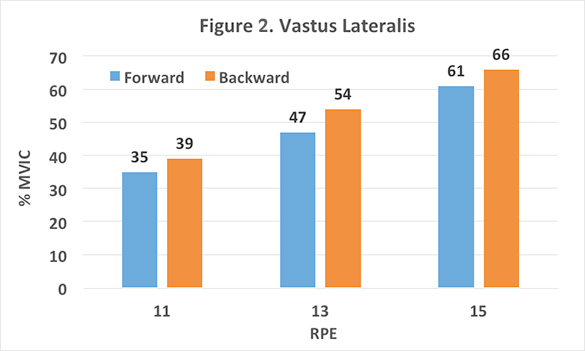 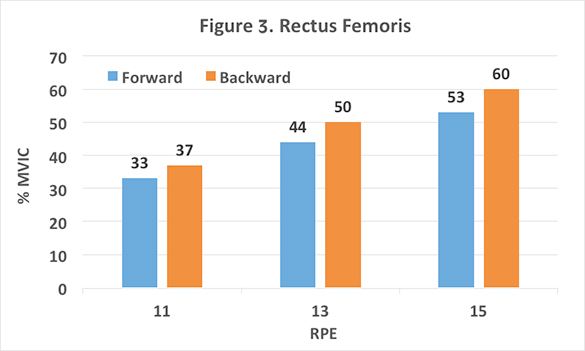 This study showed that pedaling backward on the Cascade cycle elicited higher heart-rate and energy-cost values than pedaling at identical workloads in the forward direction. The increase in physiological response was reflected by higher muscle activation of the quadriceps muscles (vastus medialis, vastus lateralis and rectus femoris), which is consistent with the subjects’ descriptions of feeling like they had to “pull” the pedals when cycling backward.

“The concept of specificity tells us that pedaling forward should still make up the vast majority of a cyclist’s training,” explains Dr. Porcari, “but the subtle differences in muscle activation seen when pedaling backward can be very beneficial.” Dr. Porcari recommends treating backward pedaling as a change of pace and a form of cross-training that better targets the quads.

Maria Cress, a member of the research team for this study, points out that by improving quadriceps strength by pedaling in the backward direction, cyclists will experience improved strength for regular cycling. “They will be able to work at a higher workload at a lower RPE and heart rate,” says Cress, “which means that incorporating backward pedaling into your routine will eventually make pedaling forward mentally and physically easier.”